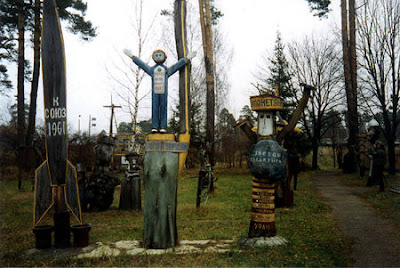 the website of the Moscow Museum of Outsider Art


The Moscow Museum of Outsider Art¹ refers on its website to Alexei Ivanovich Rudov, who made a art environment, named the Home Museum of wooden sculptures. The website has no details about this environment.

However, in an interview with James Young, which was published in Raw Vision nr 50 (winter 2005), Anna Yarkina, who at that time was deputy director of the Moscow Museum, gives more information. 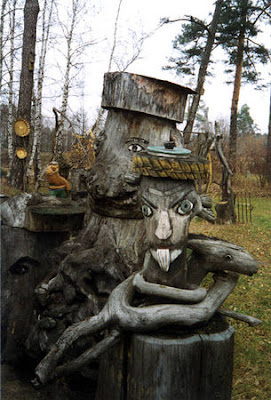 Alexei Rudov (1926-2002) lived in the city of Kondrovo, in the Kaluga area, south of Moscow. He was a railway worker, who had to quit his job around 1976, when he was 50 years old. His doctor advised him to start some creative activity, probably to prevent that Rudov would become depressive because of being idle.

That was a very good advice. Rudov began making sculptures and expercienced this as a very rewarding activity. So he went on making all kind of personalities, using wood and parts of old trees. The sculptures were exposed in the garden around his house. In the 80's of the former century this garden got the character of a museum, that was frequently visited by the local people.

The idea behind the exposition was more educative than artistic. Rudov's primary aim was to teach people to live a good life, so he told the children who visited the garden, how to experience and love beauty and how to be good people.

I understand the garden also had some reputation as an ideal backdrop for making wedding images. 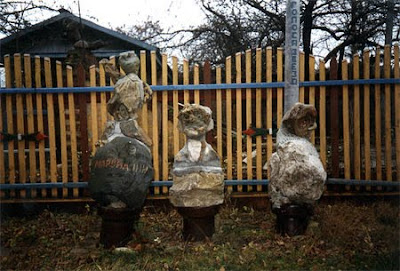 This in short is the story.

No other primary sources or documentation

So, to my best knowledge, the Moscow Museum is the only primary source on the internet that has information about Rudov's life and works.

The website Atlas Obscura meanwhile (2017) has a number of pictures of the site submitted by its readers. The short accompanying text does not include any new information.

Actual situation of the site unclear

After Rudov died, his son has arranged that a number of his sculptures were donated to the museum in Moscow. These sculptures will be restored and then will be part of the museum's collection.

There is no information about the actual status of the garden is. If it is not cared for, there is a danger that it will be vandalized.

note
¹ Because of financial problems the museum had to close in the course of 2010. Its website is still available on the internet