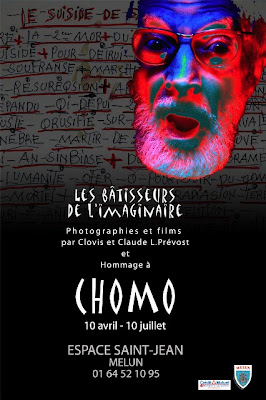 The poster above announces an exhibition that from april 10 until july 10, 2010 could be visited in the french city of Melun, south-east of Paris.

I gladly refer to this expo because it gives me the opportunity to pay tribute to Clovis and Claude L. Prévost's documentary work with regard to outsider art environments.

Clovis Prévost (Paris, 1940) after his study of architecture at the École des beaux arts in Paris turned to film and photography. Together with his wife, Claude L. Prévost (who often provided the texts) for many years he has been active in documenting through film, video, photography and text a large number of -mainly french- art environments and their creators.

During the exhibition the following films could be seen:

This is a selection of Prévost's filmography, but it gives an idea of the couple's field of work ¹.

Entitled Bâtisseurs de l'imaginaire (Builders of the imaginary) the couple put together a multimedia exposition featuring creators of art environments, which from 1975 on for over twenty years traveled through France and other European countries. With the same title between 1976 en 1981 a series of seven films about art environments was broadcasted on television. INA France diffuses these films and has made them available on DVD in 1999 (the series includes well known artists such as Tatin, Garcet, Cheval, monsieur G and Chomo)

Clovis and Claude Prévost also made a number of books with photographs of art environments by non-professionals. In 1978 they published Raymond Isidore, dit Picassiette, de Chartres, Ed du Chène, -75 p.


A new, enlarged edition with 420 pages and 595 photos was published in 2016 by Ed Klincksieck. The video has an interview with Clovis and Claude Prevost during the presentation of the new edition at the Halle Saint Pierre in Paris.


The exhibition in Melun not only highlighted the creative activity of a number of outsider artists, it also was a tribute to the creative effort of the Prévost's to document these creations.

Documentation
* Information sheet about the exposition

note
¹ A biography, bibliography and filmography of Clovis and Claude L. Prévost was published in 2016 by Halle Saint Pierre, Paris.