The French language has some nice expressions to denote people who create art environments. One of these is bâtisseurs de l'imaginaire (builders of the imaginary). The expression was introduced by Clovis and Claude Prévost when in 1990 they published a book with that title.

Jo Pillet (1947) without any doubt is such a bâtisseur. By profession he is a visual artist who makes surrealistic paintings, but as far as I know in terms of architecture and the construction of real estate he had no professional education.

Nevertheless...... he became a bâtisseur and a very special one.

It all began when in the 1970s he met Dominique Nurdin. They fell in love, became a couple and began dreaming about a life that would be different, like so many young people in their twenties do.

And then these two young people took a step to realize their dream. In 1975 they bought a plot of land of 11 ha on the Causse de Sauveterre, near Champerboux, in the Lozère department. 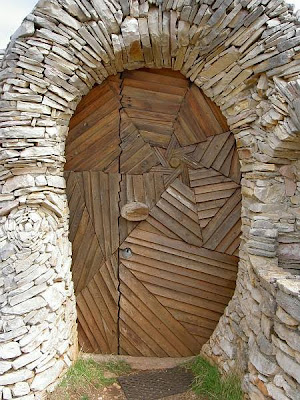 If you are not from France maybe you do not know about causses. These are sparsely populated plateaus of limestone in the Massif Central area of France.

Because of the limestone soil the water does not hold, so the landscape may be very stony and desert like, the terrain will be mainly fit for herding sheep and houses will typically be built using limestones.

However, it is a wonderful area to be around and live with the seasons. 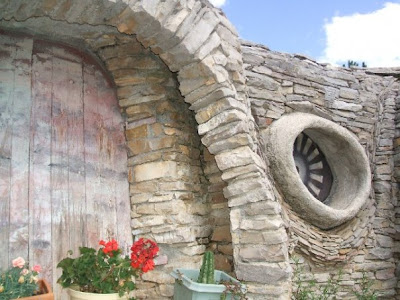 In 1978 a permit to construct was obtained and in 1979 Pillet started building. Most of the time he worked alone, although occasionally some friends would help him. He used stones that abundantly were around and structured them in the form of igloo's, which eventually, after many years of constructing, resulted in a creation as shown in the first picture.

The other pictures show how the stones were arranged to make walls, doorways, windows, and so on. The final structure is perfectly blended with the surrounding countryside.

Building the house has been a project of many, many years, accompanied by a lot of hardships. 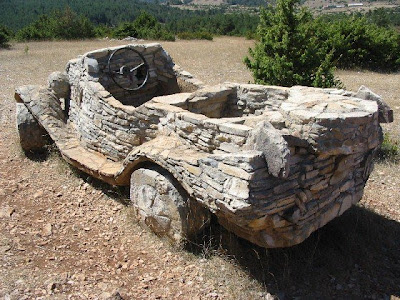 Around 1992, after more than two decades of constructing, the building had taken shape and some local newspapers wrote about it. This resulted in a lot of curious visitors who walked around and peeped into the not yet properly gated and locked property.

The Pillet family decided to provisionally gate the house and turn the location into a visitor-friendly place, especially for families with kids, Pillet constructed some gadgets such as  an automobile, a dinosaur, a coaster, a mini golf link, and he secluded a separate space to expose his artworks.

The site, which at first was named after the igloo-like constructions, now definitely was named Utopix.

It would take many more years to complete the house. For example, only in 1997 the walls on the inside were isolated to make living in wintertime comfortable and only in 2000 electricity was supplied (by solar panels).

Currently a completed project, Utopix has become part and parcel of the region's heritage. This habitation/sculpture (dwelling/sculpture) surely ranks as an art environment and it deserves it's place in the series of French bâtiments imaginaires.

Documentation
* The Utopix website, with a version in English and many pictures (such as the building process,  details of the various elements of the construction, paintings and sculptures)
* Utopix on Facebook
* Pictures (September 2013) on the Hérault Insolite weblog
* Article (May 2020) by Gloria Marchini on website Outsider Art Now, with a variety of pictures
* Article (2021) by Sonia Terhzaz, published on the website of Patrimoines irreguliers de France

Videos
* Video published on Facebook in February 2015 by Pierre Pillet, with an impression of daily life at Utopix