Born in 1937 in the small community of Albaro, Italy, Lineri currently lives in the nearby community of Zevio, in the neighbourhood of Verona.

Zevio is on the Adige river, that runs parallel with the Po river through northern Italy. On the banks of this Adige river Lineri likes to wander and look for stones. 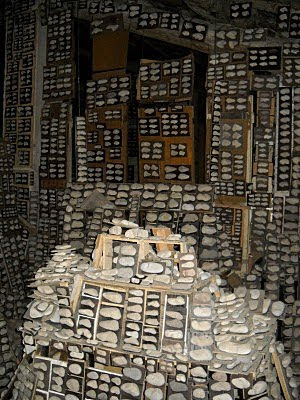 Around 1970 he began arranging these stones according to common characteristics as can be seen in the stones. It's indeed just a way of looking, for example one could discern a face in a stone and combine all facial stones.

Lineri's passion for the stones has to do with the association he has through these stones with cultures from long ago, how these people lived, what there ideas were and their ways of looking at life, how they used stones....

Arranging the stones is done in associative and intuitive way, it is a creative, artistic, not a scientific enterprise. 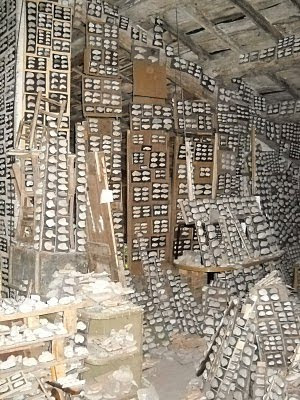 Some groups of stones have been arranged in ziggurat-like piles.

The  collection is displayed on the walls and floors of two rooms of the house and an adjacent barn. It has no specific name. Calling it a sanctuary probably is a good approach, but cathedral would be a striking name too.

In terms of collecting stones Lineri is a non-professional, the only people who do this kind of collecting by profession probably will be those archaeologists who are unearthing flints from the neolithic era.


Luigi Lineri is an artist, who is related to the art singulier group that is active in southern France. He has been writing poetry and has made paintings and ceramics. Most art singulier artists are self-taught.

In May 2013 it was announced that Lineri won the first prize in a competition held in 2012 entitled European Award for Lifelong Passions, La Secunda Luna

Documentation
* Entry on website Costruttori di Babele
* A most complete website entitled "Luigi Lineri" (in Italian and in English), with a biography, a bibliography. an interview with Lineri, a number of reviews and descriptions of his collection of stones. This website also has examples of  Lineri's poetry and his sculpting.
* Series of photographs (2011) on Francesco Galli's website

* Video The Mysteries of Pebbles made by Paolo Mucciarelli and Enrico Ranzanici (4’27”,
YouTube, February 2019). This video was the winner in the short film competition organized by Raw Vision magazine early 2019.

There are no arrangements for the general public to visit this site.
Luigi Lineri
El santuario dei sassi
Zevio, Verona, Veneto, Italy
no public visits

Email ThisBlogThis!Share to TwitterShare to FacebookShare to Pinterest
Labels: collection of specific stones