Gregorius Halman (1948) lives in the countryside near the small community of Blesdijke, southern Friesland, Netherlands. As an annex to his house, he has built a castle ¹.

Around 1990 Halman got the idea to make such a building. It took him two years to convince the local authorities that he formally should be permitted to realise his idea.

A wonderful idea it was. Halman is the owner of company in the city of Zwolle, that lends theater costumes, and he has no education in architecture or constructing at all.

But he had that dream......making some nice creative construction in roman style, with round and fluent forms, quite different from nowadays functionalist shoe-boxes. Often, at lunch time, he went to the public library to study books about Roman architecture.

He got the permission to build the castle, on condition that the towers would not be higher than 27 meters.  In 1992, when he was in his mid-forties, he began his lifetime project.

The concept of the building is in principle: a square with on the four corners circular towers. There is an underground basement, with cellars, and in 2010 the construction above ground was advanced to the second floor.


In interviews Halman explains that his activity has nothing to do with an obsession, he just has a lot of pleasure in creating a building with beautiful forms in a Roman style.

As his material he used old bricks from demolished houses and roads. He didn't care about architectural, historical or military compatibility of the castle. His castle isn't a copy of an existing one, but a product of imagination. 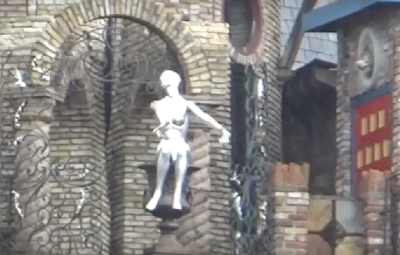 Meanwhile the building has reached its maximum height and one can say the castle as such is ready, but Halman is still working on its further completion, adding various decorative elements, both to the exterior and the interior.

Currently the site is used for specific festivities, such as a Christmas Market, wedding parties, and so on
A dragon on top
In October 2022 on top of the castle a 3.5 m large stainless steel sculpture, depicting a dragon, was placed. The sculpture, made by Albert Weijs, was a gift from Halman to himself because of his birthday. The castle already had a Phoenix on the roof.
Documentation

Videos
* YouTube had a 3.25' video (2007) made by Martin Vlaanderen, which is not available on the internet anymore. In this video Halman explained the ideas behind what he is doing. OEE-texts has a transcript in English of this conversation.
* Scenes of the site (2019) on the Netherlands trip video by Serflac (YouTube, starts at 5.10, cannot be embedded here)
Video
* A video by Jan Menger (16'45", YouTube, uploaded April 2011) shows a variety of details of the construction, both of the interior and the exterior


note
¹ The name of the castle is "Olt Stoutenburght". Olt means old, stout in former days Dutch is brave, in nowadays Dutch it is naughty and burght means citadel.
In the Middle Ages a -currently almost disappeared- castle named Toutenburg existed in the area around Vollenhove, some 30 km south-west of Blesdijke.