Johannes Setälä (b. 1941) from Karjalohja, Finland, as a youngster already showed his creative skills when at age twelve he participated in a contest of drawing comics and won the competition.

After this, he also made cartoons for Finnish magazines. but his main professional activity was being a jazz-musician, playing drums. 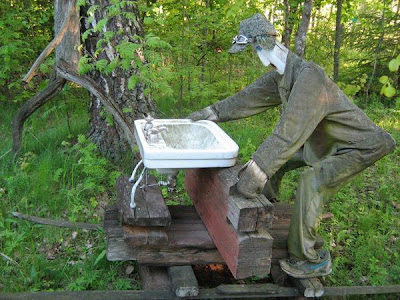 In the 1970s Setälä became interested both in visual art and in shamanism, two topics that strongly influenced him during the rest of his life.

Using all kinds of recycled and natural materials he began making life-sized sculptures he displayed in the garden around his house. These sculptures impersonated all kinds of people.

He also covered the walls of the barn and the house with frescoes and he made a lot of paintings and drawings. 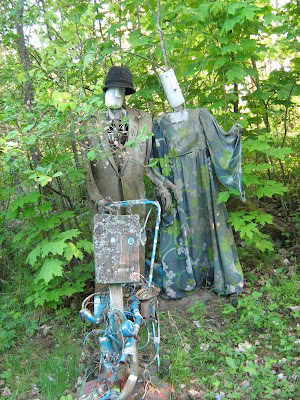 With regard to shamanism, Setälä deepened his knowledge of shamanism in such a way, that in 1996 his qualities in this field were recognized and he on an international conference of indigenous people formally was ordained as a shaman.

Setäla wrote a number of books on this subject. Currently he is still active in this field, giving courses in and lecturing on shamanism.

He also is active in the world of art, doing performances and participating in exhibitions (Kiasma, In another world, 2005; Aboa Vetus & Ars Nova, Not to be framed, 2010)

Paintings by Setälä have been shown (some for the first time) on the Kalevala mindscape exposition in the Gallen-Kallela Museum, Espoo, Finland (September 2010-January 2011)