This towery singular architecture, made by Sir Thomas Tresham (1543-1605) has as much symbolism in it as the Eben-Ezer Tower in Belgium created by Robert Garcet.

Living in very different era's, both men had a deep inner conviction they wished to express and make public by realizing a very special building.

Thomas Tresham was born in a well to do English family, living in a centuries-old estate in Rushton, Northampton-shire, in the UK.

He lost both parents before he was three years of age and was educated by his grandfather. When that grandfather died in 1557, young Thomas at age 15 became the landlord of the property.

A well educated, clever young man, who owned a rather well stocked library, he was around in the highest social circles in England. However, he was a catholic and catholic Spain in that period was a threat to England (remember the Armada?), so the queen was not so happy with catholic people.

Sir Thomas Tresham however had no intention to accept the official protestant religion and he continued to be a devote catholic. Because of this, between 1578 and 1593, he was prosecuted and fined, and was regularly put into prison.

In 1593, a free man again, he decided to design and build a structure to honor the Holy Trinity, in this way giving expression to his deepest convictions and religious beliefs. 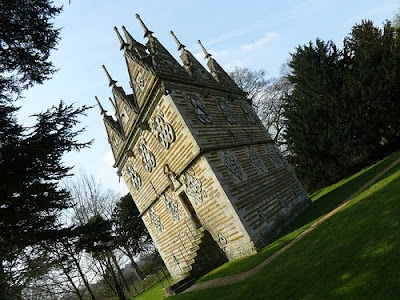 So the number three became a leading principle in the structure he constructed.

It is a triangular building, the three sides measure 33.3 feet, each side has three pinnacles, the building has three stories, the texts of the inscriptions have 33 letters, the (few) windows are hexagons that by its diagonals will be divided into triangles, and in this way it goes on and on. 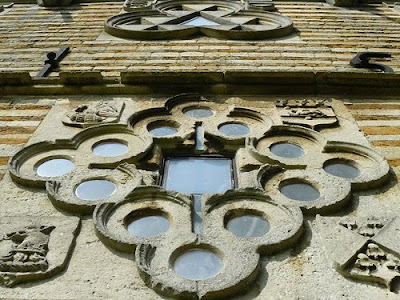 It took Sir Tresham some four years to build this singular structure. He may have employed a number of workmen to help him finishing it, but the design without any doubt was his own work.

In the UK a construction like this one will be classified as a folly and of course one can look at it in this way too.

Currently the Triangular Lodge is cared for by English Heritage. It can be visited by the public. A booklet is available with details of all the building's symbolism..

Documentation
* The internet has various articles about the lodge. Here is a link to Wikipedia.