Wirwignes is a small community of some 700 inhabitants in the coastal area of northern France, not far from Boulogne sur Mer.

In 1867 he made a trip to Palestine, Egypt and Italy, and when he came back he probably was very enthusiast about what he had seen and experienced. His trip may have inspired him to make the biblical stories and the commandments better understandable for the many illiterate inhabitants of the community, by visually displaying these in the church.

Although abbé Lecoutre had no training in doing artwork at all, in 1867 he began decorating the walls of the church with frescoes and texts, all together kind of a catechism for the people of the parish. It's rather curious that in the same period another priest, abbé Victor Paysant, was active in decorating the church of his parish, Menil-Gondouin in Normandy.

Abbé Lecoutre did not leave a square centimeter of the walls and the ceiling of the church untreated. He also added all kinds of sculpted and decorated elements to the church.

Apart from these decorations new chapels were built on the sides of the church and new glass-stained windows were installed.


In 1887 the works had advanced so far, that the bishop of Arras could re-consecrate the church.

Abbé Lecoutre continued his decorative activities. And then, in 1907 while completing a decoration in the height of the church, he fell down from the scaffold and died.

The priest was buried on the local cemetery in front of the church, . 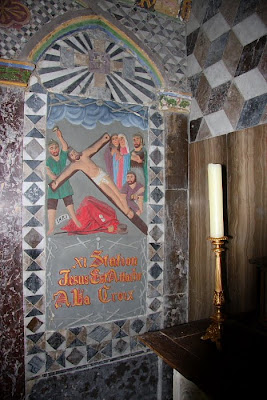 The church became a historical monument

The church, which is owned by the municipality, in 2006 got the status of a historical monument.

It will be closed on weekdays. However, on demand a guided visit can be arranged by a volunteer of the Pas de Calais Greeters organisation (situation such as existing in 2017).