Didier Lobert de Bouillon Viéville (1934-2021) was born in Boulogne sur Seine, a suburb of Paris, France. His father was director of a small metallurgical factory and assumed that his son would succeed him later. That also meant that Didier Lobert as a young man was trained in a technical direction, while his preference was more in the direction of fine arts.

Recovering from a major operation in 1963, Lobert decided that he should not go further in engineering, but follow his true vocation and move towards art and design. Thereafter, he had jobs as an industrial designer and secretary of art galleries in Pars.

In 1968 -the year of the student's revolt- he had his own revolution and following his deepest wish to be a visual artist, he decided to move to the countryside, settling in Normandy, where his parents had a summer house in Saint-Germain-sur-Avre.

Here he would stay for the rest of his life.

And once arrived, he made a decision that would define this further life in a very decisive way.

Lobert wanted to build a studio where he could make paintings and he decided to construct an annex to the family house that shouldn't be some modern structure, but rather a medieval building that would fit in the lovely landscape of the valley of the Avre river.

It would become a dungeon in medieval style.

When I wrote the original version of this post, I thought Lobert had Eugène-Emmanuel Viollet-le-Duc (1814-1879) in mind, but according to Sylvaine Lobert, his daughter, he was inspired by the medieval architecture of the period of transition in between the Roman and the Gothic style, and probably also by the defensive constructions of old in the Avre area, once the frontier between Normandy and France. So, he is working in the twelfth and thirteenth century tradition.

I have the strong feeling that the look of his singular architecture answers to the image of a medieval castle we all have in our subconscious.

Lobert has constructed this 21 meter high structure with his own hands, without any training as an architect, mason or constructor (but his technical training when young was an advantage of course). The construction was made step-by-step, more based upon creative insight, intuition and common sense than on a fully worked out plan.


Lobert has used modern construction materials, such as reinforced concrete and breeze or cinder blocks cut in two. He has succeeded in giving the material a medieval look. 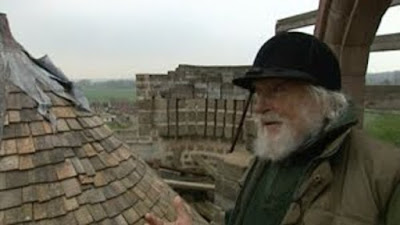 The interior also has a medieval atmosphere, with vaults, a spiral staircase, and so on.

In the early years of the 21st century the construction of the Donjon could be considered as almost finished.

Transforming a house into an abbey

However, a new project was looming. Lobert de Bouillon Viéville, although at that time in his late sixties, began renovating his house.

It should become kind of an abbey. A medieval one? Of course!


As above picture shows, it once more became a wonderful construction. Built in Romanesque and Gothic style, the Abbey of Monthulé -named after a hamlet near the site- demonstrates how the use of concrete and contemporary building methods can result in beautiful buildings in the manner of the ancients.

The site in its current (2020) form, an artistic ensemble and an exceptional heritage, contributes to the appeal of the green Norman countryside where it is located, near the former frontier of the Duchy of Normandie with the Kingdom of France.

In 2008 an association of friends was founded by Sylvaine Lobert, daughter of the artist. Currently it has some fifty active members (contact: sylvaine.lobert@orange.fr)

In the course of 2019 it became apparent that - as is more common in the field of art environments - not everyone appreciates Lobert's works of art. Neighbors and local authorities are sometimes indifferent to the creations. Despite its character of heritage and its cultural significance, Lobert's site has become the subject of threatened closures, prohibition of visitors, and even, potentially, eviction and destruction of his work.
†
Didier Lobert de Bouillon Viéville passed away December 13, 2021

Documentation
* Weblog with a variety of information about the Donjon
* Article in OEE-texts (March 2020) about this art environment by Sylvaine Lobert, daughter of the artist, with a biography
* Weblog of the site
* Article on SPACES website (2012)
* Article in weblog Après la pub (April 2012), with some pictures of the site
* Article (September 2020) in newspaper Le Parisien
Video
* Video (August 2020) by France 3 TV (YouTube, 2'42")

the site is not open to the public, but by appointment a visit (6-8 people)
can be arranged (contact via Yolande Paris pamyola@gmail.com)
Posted by henk van es at 6:58 PM