The Mont Cindre is part of the hilly region of the Monts d'Or (golden mountains) north of the French city of Lyon. This Mont Cindre from distant history on is a place of pilgrimage and worship. It is said that in the 5th century there might have been a hermitage and from the 15th century the existence of a chapel and a hermitage has been documented.

There is a poster showing the names of all hermits who resided in the hermitage on the Mont Cindre.

This post is about the last hermit, Émile Damidot (? - 1910),  who in 1878 as frère François settled himself in the hermitage (the "job" had been advertised by the local ecclesiastical authorities, and Damidot had applied successfully).

Damidot was a mason by profession, and without any doubt he preferred physical labour above meditation.

So, without any education in architecture, he started creating a belvedère with a 12 m high church-like creative construction, as can be seen on this old postcard: 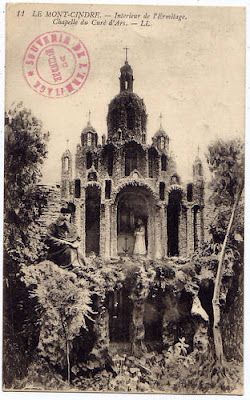 He made this construction with his own hands, collecting stones from along the road, applying these stones with cement on iron frames.

It is curious to note that in the same period, south of Lyon, facteur Cheval was active in constructing his Palais Idéal, working on it from 1879 - 1912. Frère François started in 1878 and went on with the creation until 1910, when he died while at work.

The two constructions, although different in detail and intention, have parallels in their outline in general and the building techniques used.


Underneath the belvedère Damidot created a garden with winding paths and ponds. There were hundreds of little shrines, where all kinds of statues were on display (the virgin Mary, saints, Jeanne d'Arc).

Just an art environment that would invite people to walk around, maybe meditating and anyway enjoying the views of Lyon from high on the hill.

After Damidot had passed away, the parish dit not advertise again for a successor. Frère François was the last hermit of the Mont Cindre.

In the following years the site hasn't been protected very well and many statues have been stolen.

However, nowadays many people and groups show interest in the creation and its future. Around 2009 the council of Saint Cyr decided to support activities to preserve the site for the future. An architectural study was initiated to document a formal request to remark the site as a historical monument. In 2012 the authorities joined forces with local groups to raise money to restore the complex.

For safety reasons, the site is not open for free visits by the public, but guided tours are arranged during the year.

From around 1900 until around 1960 the area around the hermitage has been kind of a leisure park for the inhabitants of Lyon (with restaurants, a roller rink, a funny tower, picnic sites and so on)

The hill, within the community of Saint Cyr au Mont d'Or, gradually has become incorporated in the urbanized area of greater Lyon.

Documentation
* Authored by Marie-Chantal Pralus the website le Mont Cindre et son ermitage has all historical details (in french) and a lot of pictures, mainly old postcards.
* The website of the Grand Prix Pèlerin du Patrimoine 2017 invited the public to vote for one of the three nominated heritage sites in France, among which the Hermitage. The website includes a detailed and beautifully illustrated article about the history and current state of the site.