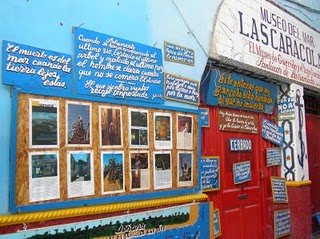 
José María Garrido (1925-2011), from the Spanish community of Sanlúcar de Barrameda, near the city of Cadiz (Spain), was a sailor, but when in 1959 his best friend friend drowned in the sea, he decided to quit seamanship and to stay on the mainland for the rest of his life.

In honor of this friend, in 1960 he began embellishing his house with with various other items related to the sea and to seamanship and with shells he collected from beaches around. 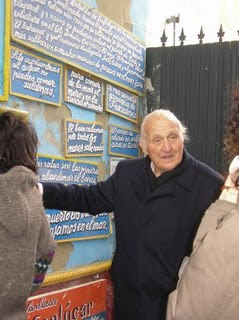 The Museo del Mar las Caracolas had around 80.000 shells. Together with all other items relating to the sea and a lot of placards with explanatory texts by Garrido, these covered all walls of all rooms of the house.

In the early years of the museum Garrido was always ready to meet visitors and to explain the collection. If tourists would not find the site on their own, he would look for them on the adjacent squares and persuade them to come and take a look.


In later years, when Garrido became too old to entertain visitors, the museum only occasionally could be visited by those who were allowed an appointment. 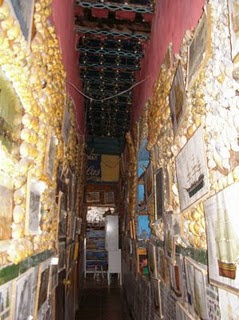 The museum, with its fully decorated interior, ranked as an art environment, a designation that was reinforced by a very special construction Garrido had added to the roof of his house.

On the oblong flat roof he built from scrap material a fully equipped ship, with a flight, masts, gunwales, a sleeping cabin, you name it. 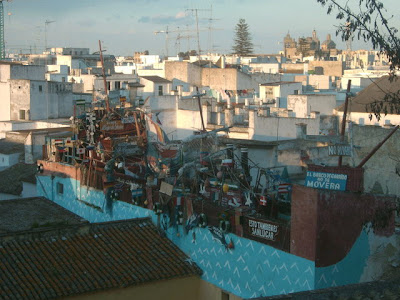 this picture courtesy of Ketari


The local authorities were not amused. They preferred that this ship's construction would sail off to the seven seas, so that they could realise some plans of urban reconstruction. 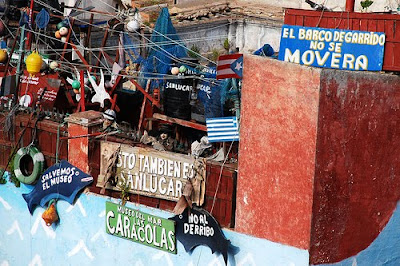 his picture (2007) from the weblog Crónicas de une cámera


Garrido however announced that he wanted to maintain the house, which dated from 1503 and was located is in one of the oldest neighborhoods of the community. Various placards announced that this ship would not move away, that it belonged to Sanlúcar, that it was no al Derrida

The struggle between Garrido and the authorities has continued until the artist died, although, according to an article in a local newspaper, in November 2010 Garrido and his family were invited by the (new) mayor to come to the town hall to be honored and hear words of praise for his contribution to the city.

The museum doesn't exist anymore. After Garrido's death the authorities succeeded in implementing their plans for urban renewal, The house/museum was razed to the ground