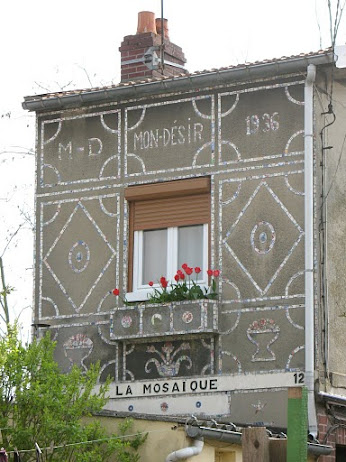 
The facade tells a lot. This house, located in Sotteville-les-Rouens in Normandy, France, is named Mon Désir (My Desire), the two capital letters M.D. left above could indicate the maker M. Dulong, the house was constructed in 1936 and the decorations are la mosaïque. 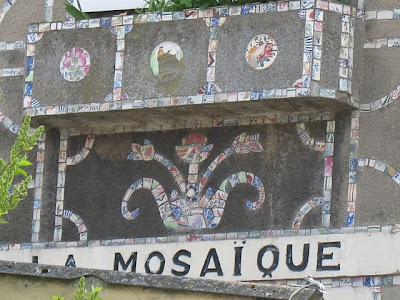 When in 2010 I did the first version of this post, I did not know the name of the one who made these decorations. The limited information then available on the internet included that the house was built and decorated by an employee of the French national railroads company SNCF and that he was a mason.

In 2015 however I found an article on the weblog of Pascal Levaillant with a report of  his visit to the house and a lot of pictures too. In passing the author refers to M. Dulong as the one who decorated the house and he also remarks that the inscription M.D. on the facade relates to his initials.

The author of the mosaics was a railwayman indeed, who had a job a the depot of the SNCF in Sotteville. To create the mosaics he used all kind of waste material, but also pieces of crockery he collected after the bombing of the city in World War II. The house itself was spared in the bombing.
. 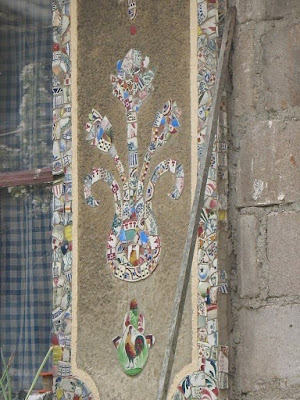 In most French sources this art environment is commonly referred to as the house of Michel Crépin, who was the one who in 1972 bought it, proud that he could live in such a beautifully decorated house.

He has ensured that the mosaics have remained intact. 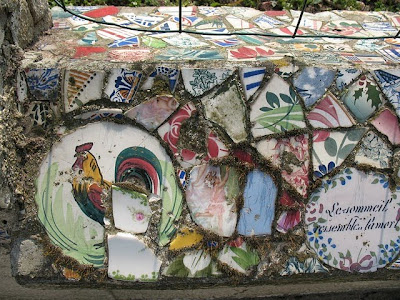 Documentation
* Article (September 2014) in the weblog of Pascal Levaillant with a lot of pictures of the mosaics
* The Art Insolite website has more pictures of this environment.
* Pascale Lemare, Normandie Insolite (Ed Bonneton, 2005) writes about the house and its decorations (but he does not disclose who was the original author and gives an incorrect address),