At the top of a terraced hill just outside the hamlet Valdonica in Liguria, Italy, a single-handedly built castle dominates a garden with wire-shaped structures that refer to the galaxy.

This art environment has been created by Umberto Bonini (1926-2002), who was the owner of a shop selling men's clothes in the Ligurian city of La Spezia.

In the 1960s when staying in a psychiatric hospital because of a depression, he got visions of a circular structure that turned towards the light.

Once healed and with this experience in mind, in the 1970s on a plot of land he owned, just outside the hamlet Valdonica (part of Calice al Cornoviglio, some 25 km north of la Spezia), Bonini began constructing a castle-like structure, with walls and towers, using stones and pebbles from a nearby river.

The walls of the buildings have been embellished with sculpted faces.

The site has a beautiful garden with terraces, ponds, footpaths, lawns, etc., all made and laid out singlehandedly by Bonini. 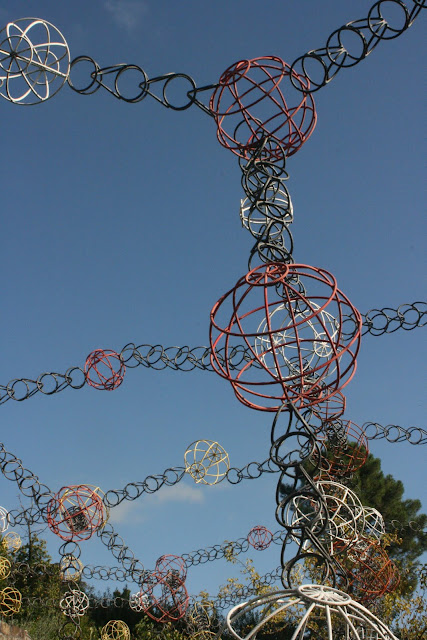 And then, from construction iron Bonini made all kinds of spheres, tubes and cylinders, which he displayed in the garden and on the buildings, as can be seen in the pictures above and below. A number of  these constructions depicted the galactic universe, so that's why the site is named after the galaxy.

The complex is separated from the provincial road by an iron fence, which is decorated in various ways and is provided with texts.

Umberto Bonini has been active in creating this art environment for some thirty years. He passed away in 2002.

Currently his son. Mario Bonini, takes care of the site, which occasionally can be visited as a museum. 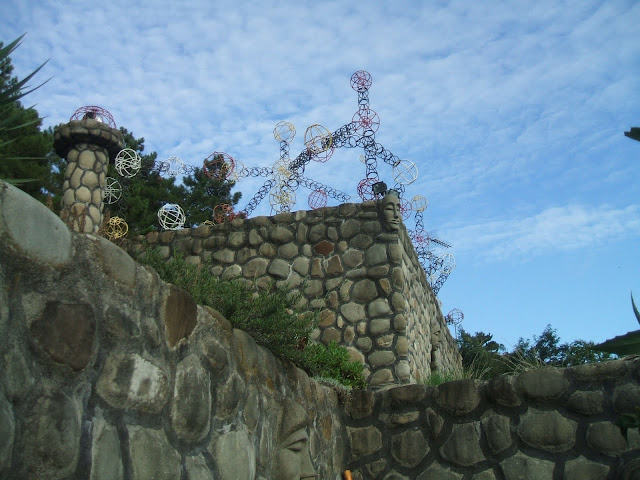