Oreste Fernando Nannetti (1927-1994) is known because of an enormous graffiti he carved into the cement of an outside wall of the psychiatric institution in Volterra, Italy, where he was hospitalized. The creation, made between 1959 and 1972, was some 180 m long and some 1.20 m high.

Nannetti has spent most of his life in institutions. He was born in Rome, never knew who his father was, and when he was seven, he already was included into a charitable institution. At the age of ten he came to live in an institution for people with a a mental handicap.

At the age of 21, in 1948, he had to appear in court because of insulting authorities. He was not formally sentenced, as he was declared to be psychiatric, so he was sent into a psychiatric institution in Rome.

In 1958 Nannetti was transferred to the psychiatric hospital in the city of Volterra, at that time one of the largest (and outdated) institutions in Italy.

Here, in 1959, he began making his creation on the wall. Having no instruments, he used the buckle of his belt to carve the drawings and texts into the plaster.


Nannetti also has produced texts and drawings on paper made by pen and ink, some 1700 altogether, combined into a large book. These creations have gone lost, being burned, together with some personal belongings after he left the hospital. However, of this creation photocopies have been made.

He also has decorated a 106 m long guard rail, but this one has definitely disappeared.

In his works Nannetti, who preferred to refer to himself as NOF4 or Nanof, evokes an imaginary world. He depicts himself as an astral colonel or an astronautic mining engineer and he tells stories about cosmic travels, conquests of imaginary countries, telepathic cosmic connections, magical powers and fantastic impersonations, all together creating his own fantasy world, of which he himself is one of the main characters.

After he was discharged from the clinic in 1973 Nannetti settled in the city of Volterra, where he died in 1994. I have not found information about the way he earned a living during the last twenty years of his life.

Saving what has remained of the creation

In 1978 the Italian government made the rather drastic decision to close all large psychiatric institutions in the country. This also concerned the institute in Volterra, which was closed in 1979.

Aldo Trafeli, who worked as a nurse in the hospital and who had recognized the significance of Nannetti's inscriptions, made sure that they were photographed (by Pier Nello Manoni -see documentation).

After the institute was closed, the buildings just have been left as they were. The graffiti wall became neglected and meanwhile about half of the plaster has gone.

Although there always have been people who were interested in this work, as it was seen as a rather authentic specimen of art brut, only from around 2010 there was more general interest. Pleas to save the work appeared in writing and on videos and a non-profit organisation was formed (Inclusione Graffio & Parole) to save what has been left of the graffiti.
A piece of 8 meters of wall with inscriptions has now been saved and restored

In 2010, from September 3 until October 3, Nannetti's creations could be seen at an exposition of (graffitied and textual) outsider art in the city of Genova, Museoteatro della Commenda di Pré, curated by Gustavo Giacosa of the association ContemporArt

In 2011 the Collection de l'Art Brut, Lausanne had an exposition about Nannetti's work (May 13 - October 30). The catalog of this expo had contributions of Lucienne Peiry, Antonio Tabucchi, Anne Lovell, Pier Nello Manoni, Ilario Rossi, Vincent Capt and Jessica Schupbach. It came with a 7 m long unfoldable page and a 20 min video.
Situation in 2022 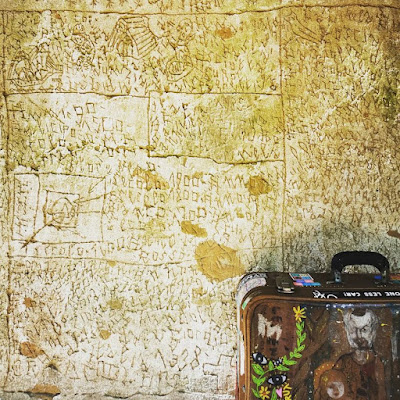 Above picture was made by Tiramisu Bootfighter in July 2022 during a trip he made in the context of his project La Valise, Galerie Ambulante. The photo shows that the decorations on the wall are still in reasonable condition, but gradually decaying.
Documentation
* Mino Trafeli & Pier Nello Manoni (photo's), NOF4, Il libro della vita, 1984 (Ed. del Cerro)
* A film by Pier Nello and Erika Manoni,  I graffiti della mente, 20’, italian, undertitles in french or english, Produced by Blue Films, Rome, 2002. (Available on DVD)
* Lucienne Peiry, "Il soliloquio lapidario di Nannetti", in: Quaderni d' altri tempi #64 (2016) (this article is the re-edited introduction to the catalog of the 2011 exposition in the Collection de l'Art Brut, Lausanne)
* A fotoseries on Flickr by Carlo Tardani (uploaded May 2011) about the abandoned psychiatric hospital
* Article on SPACES website (2012)
* Book by Lucienne Peiry, Le livre de Pierre (The stone book). Paris (Allia Ed), 2020, with pictures of drawings by Nannetti and photographs by Pierre Nello Manoni and Mario del Curto
* Article (April 2, 2020) in French journal Libération (also in relation with the book by Lucienne Peiry
Videos
* Video by Federico Formica, Salvate il graffiti dell follia (5'50", 2010, Vimeo)

Email ThisBlogThis!Share to TwitterShare to FacebookShare to Pinterest
Labels: exterior decorated with inscriptions