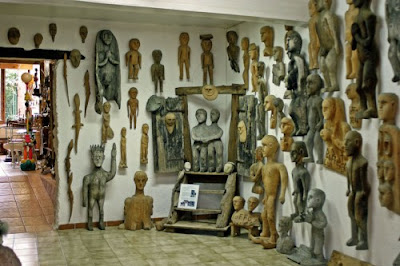 picture (2008) by Bruno Montpied from his weblog

The fantastic garden, an art environment made by Luigi Buffo (1919-1997), doesn't exist any more.

Born in Mareno di Piave, Treviso, Italy, Luigi Buffo from childhood on had to work as a farmhand, without enjoying any schooling. Later on he migrated from Italy to the south of France, where he had a job as a mason. He settled in the small community of Lagardelle sur Lèze, south of the city of Toulouse.

Around 1980 Buffo began making all kind of sculptures from concrete which he installed in the garden of his house. He impersonated holy persons, ordinary people, animals and so on. He also has been making wooden sculptures. 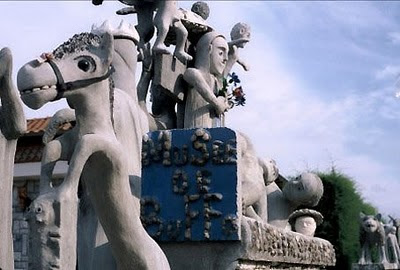 Luigi Buffo has been active in making sculptures for at least some twenty years.

When I wrote the original version of this post, the internet just had a few sources about Buffo's life and work, like french weblogs Animula Vagula  and le Poignard Subtil. There may be some written french sources (in periodicals), but these are out of my reach.

The site has been destroyed

Buffo died in 1997. Around 2003 the inheritors, in order to sell the house, destroyed almost all concrete sculptures. At the last moment the wooden sculptures have been saved from being burned, just because some interested people managed to get a deal with the family.

So, thanks to Martine and Pierre-Louis Boudra, who run a small private museum on outsider, naive and folk art in the south of France, these wooden sculptures (as in the first picture, above) nowadays still can be admired.

The museum of the Boudra's, les Amoureux d'Angélique, is located in Carla-Bayle, in the Ariège department (More about this private museum, with a variety of pictures, in the weblog of Sophie Lepetit, april 5, 2014).

Documentation/more pictures
* A series of pictures of the wooden sculptures in the Musée Amoureux d'Angélique on the weblog of Sophie Lepetit (april 2014)
* Animula Vagula: diashow of Buffo's concrete structures

* Bruno Montpied's weblog, le Poignard Subtil: pictures of (mainly the wooden) sculptures
* The weblog of Jean-Michel Chesné (march 2011) has a number of photographs of the sculptures made by Jean-François Maurice, who has visited Luigi Buffo just before he became ill
* Glaudio da Silva, Le sanctuaire de Buffo, movie, 2006, 20'
* Most of the wooden sculptures from the Amoureux d'Angélique collection have been part of the Banditi dell'Arte exposition (Paris, 2012)
Video
* In relation with this expo a video was made (1'12", YouTube, april 2012, Halle Saint Pierre, Paris)