Ezechiele Leandro (1905-1981) transformed his house in San Cesario di Lecce, Italy, into a museum where he exposed his paintings and small sculptures. The garden outside, named the Sanctuary of Patience, became a sculpture garden with a vast collection of large sculptures.

Leandro was born in Lequile, Italy. An abandoned baby, he was united with his father at the age of eleven. As a young man, in his mid twenties, he had artistic aspirations, focused upon making sculptures, but I did not come along any information saying that  he followed lessons at an art school.

He married in 1933 and in the same year, to earn a living,  he went to Africa, where he had a job as a miner. During his stay in Africa he became acquainted with the local way of transforming and coloring indigenous materials into art works.

After a stay of some years in Africa, he lived for some time in Germany and then was enlisted in the Italian army.

After World War II Leandro had various jobs, but finally he became operator of a bicycle shop in the community of San Cesario di Lecce. Here he bought a plot of land along the Via Gerundolo where he built the house that in later years would become the museum. 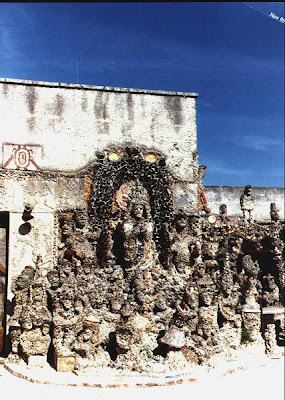 In 1957 at the age of 52 Leandro began making paintings, which earned him some reputation. He also was active in writing prose and poetry.

In the 1960s, when he was in his late fifties, Leandro began decorating the garden, embellishing its walls and making a large number of sculptures by applying concrete to iron frames and decorating the surface with mosaics made from pieces of glass, pottery and recycled material, that he collected when cycling around in the community.

Some neighbours vehemently opposed the realization of the sculpture garden and asked the local authorities to remove it, an action without any result, although Leandro had to fortify the wall around the garden to protect his creation from unfriendly treatment by his fellow citizens.

In October 1975 the Sanctuary was officially opened. The house became a museum, that could be visited by the public.

Ezechiele Leandro died in 1981 (His wife had passed away in 1970; the couple had a number of children, who became the heirs).

The site still exists, but is in decay

Currently the sculpture garden still exists. Until around 2013 actions to interest the authorities in taking measures to save the site failed and the sculptures, unprotected to the influences of the weather, were left to their fate. The Museo could not be visited anymore..

However, in 2013 a local group of friends of Leandro's oeuvre organised a petition, asking relevant Italian authorities  to take better care of the site.

Probably as a result of the activities of this group of friends, the city of Cesario di Lecce commissioned a retrospective exhibition featuring Leandro and his creations (February 28 - March 16, 2014 in the local Palazzo Ducal).

Curators Lorenzo Madaro and Luigi Negro hoped to rejoin the artist with his fellow citizens and strengthen a relationship that too often was misunderstood and difficult.

In the summer of 2016 another retrospective was organized under the auspices of local and regional authorities and organizations in the field of art, including the provincial museum Sigismondo Castromediano (Lesse), the Rizomi Art Brut Gallery (Turin) and the Osservatorio Outsider Art (Palermo).

A first step towards saving the art environment (2014)

April 2014 the superintendent of the artistic heritage in Puglia announced a ban on the removal of art works from Leandro's Santuario without formal permission of the relevant Italian authorities, which can be seen as a first step towards saving the site for the future.

Email ThisBlogThis!Share to TwitterShare to FacebookShare to Pinterest
Labels: garden with sculptures from concrete and mosaic, mosaic decorated exterior