Jean Prosper Gilis (1907-1974) was a mason who lived in a small community in the south of France in the Bergerac area. In 1968, at age 61, he began transforming the garden around his house into kind of a garden of Eden, decorating it with brightly colored sculptures made of cement, manly depicting a variety of animals. 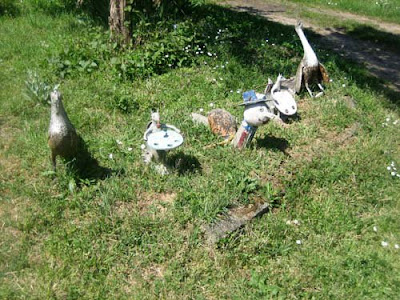 Some sculptures represent personalities, like the famous French marshal le Clerc and general Charles de Gaulle, but it is obvious Gilis preferred to make sculptures of animals. 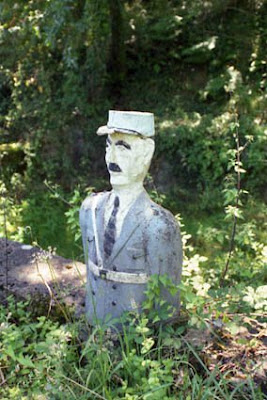 Gilis has been making these creations for some five, six years, and since he suffered from sciatica, he must have needed a lot of willpower and energy to pursue his creative activity. As he got sicker, he made his creations lying on a stretcher.

It appears that one of the statues, presumably depicting de Gaulle, in reality is a self-portrait of Gilis, which -because time was pressing- was mounted upon a torso of the general. This must have been the last sculpture Gilis made (This information by Jean-François Maurice on the weblog of Jean-Michel Chesné, see below in the documentation).

Jean Prosper Gillis died in 1974. In 2010, when this post was first published, the garden still existed, but it was clear that the sculptures gradually were loosing their colours and that the seasons had taken their toll.

Madame Gilis had become too old to take care of the garden and there was no one around to help her.
The internet has no reports of the site's situation in later years.

The garden was a sweet, small monument reflecting former times, a testimonial to the creativity and perseverance of a modest man from a former generation, whose creations hardly anyone cares about today.