Above picture shows an art environment in Pont-à-Vendin, a small community in the Pas de Calais area in northern France, that has existed from the 1970s until around 2018.
Life and works

The modest garden in front of a modest house included sculptures created by Léon Évangelaire (1925-2017) .

In 1945 Évangelaire settled in Pont-à-Vendin with the idea to find work in the mining industry, at that time the dominating industry in the north of France.

He first had some small jobs and then he was employed by the railway service of the regional mining company, first as a switchman, later as a train driver on the line between Lens and Auchy.

In the 1970s, already in his forties,  he began making sculptures which he put on display in the small garden in front of his house. His first creations already included representations of Tarzan, an elephant and a giraffe. 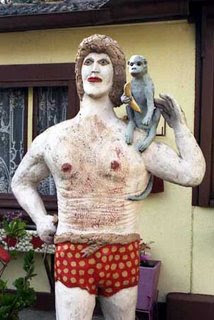 In later years sculptures of other animals were added and Tarzan's companion Jane was also depicted.

In this way the garden became kind of a zoo, or maybe a jungle, featuring Tarzan with the monkey Nkima on his shoulder and Jane, who carries a monkey on her right arm......... 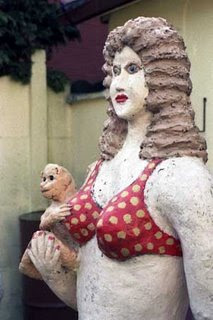 The scene is not what Hollywood movies would let us believe about Tarzan and Jane, but would that affect one's appreciation of Évangelaire's charming representation of Edgar Rice Burroughs' fictional characters?

Around 1998 Évangelaire made his final creations. At that time he was in his seventies and moreover, the garden was too small to include more sculptures. He died in 2017 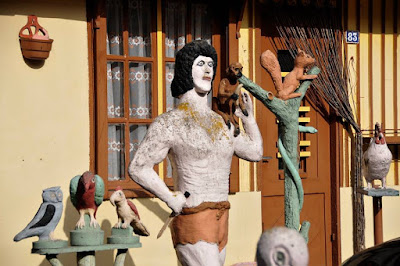 In 2018 the garden, which could be seen from the street, still existed in its original lay out. However, in September 2020 it was reported on Facebook that the sculptures had been removed, maybe sold by his heirs.
Documentation
"Le zoo de Tarzan et Jane de Léon Évangelaire", in: Le Service du Patrimoine Culturel de la région Nord-Pas de Calais,  D'Étonnants Jardins en Nord-Pas de Calais.  Inventaire général du patrimoine culturel (Images du Patrimoine, 293). Lyon (Ed. Lieux-Dits), 2015, pp 68-73
* l'Inventaire du patrimoine culturel. Région Hauts-de-France, pictures and description
* Website Habitants-paysagistes (by Lille Art Museum, from march 2018 on) has a variety of pictures by Francis David (2002) and also a documentary panel by René Escard