This singular architecture is a creative statement in stone. All parts of the house have been made from stone, not just the walls and the floors, but also the ceilings, the doors, the beds, the tables and the chairs.

The house has been constructed single-handedly by one man, with the permanent help of his mule and the occasional assistance of his two sons.

Antonio Aguilera Rueda (1896-1980) was born in the community of Porcuna, east of Córdoba in the Andalucía area of Spain.

As a youngster he grew up in the Paseo de Jesús and, as he said in a book he wrote in 1975, he had ideas about building his own house, just to have an accommodation to live in when being old.

In the early 1930s Rueda, who had a job as a stone cutter, could become owner of a piece of land near where he lived. On this plot, in 1931 he began constructing his house.

Using stones from the local quarries in the constructing of houses was an age old tradition in the community, but what Rueda undertook was rather exceptional. His idea was to create a castle-like house, with a facade, three storeys, patios and towers, using just stone as material.

It took him almost 30 years to complete the project.

In his book, published in 1975,  Rueda describes in a sober way the hard work he had to perform, the setbacks he had to experience and the critical and sometimes derisive comments he got from bystanders.

However, he persevered and on May 11th 1960 the project was formally declared completed. 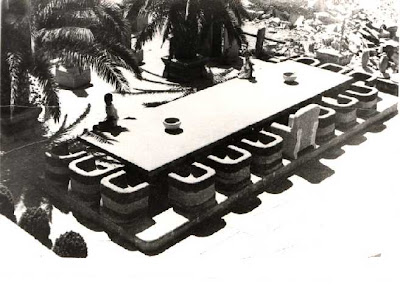 Apart from the doors and ceilings of stone, a very spectacular item of the house is the table, that is situated in one of the patios. The tabletop is a stone slab 7 m long, 2 m wide, and 10 cm thick. The slab, fastened to trolleys, was transported from the quarry by manpower delivered by neighbours and friends who pulled the ropes.

The table sits the host and twelve guests, in stone chairs of course.

Rueda had some twenty years to enjoy living in this creative construction. He died in 1980.

The house has become a museum

Currently the house is a local museum, which attracts a lot of visitors.