Girouettes....... wind vanes.....  devices that will turn around in the wind......I like how these are named in French, because of the association the word girouette has with "rotating", but that is an incorrect association, because etymologically girouette comes from Anglo-Norman wire-wite.

A nice collection of homemade rotating devices could be seen from the street in  the small community of Bosgouet in Normandy, France.

These girouettes and other rotating devices have been constructed by Yves Floc'h (born around 1938) who had various jobs in the blacksmith profession and later in his life worked as a fireman (experiencing a gas explosion in 1963) and as an operator in an enterprise. 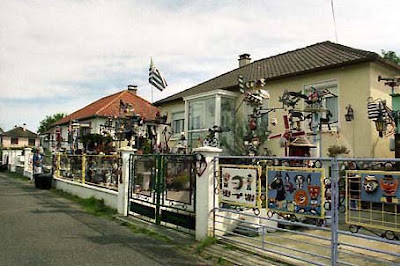 Floc'h began making his kinetic constructions in 1995, probably when he became retired. There is a story that says he wanted to do something so as not to get bored.

He used all kinds of recycled material, old parts of  lawn mowers, bicycles, cars, accessories of machines that are used in and around the house, and so on, all painted in bright colors.

Like other bâtisseurs de l'imaginaire Floc'h began by constructing a windmill, but in the course of time he developed his own personal style in transforming the front of his house into a colorful ensemble of rotating devices.

According to Francis David, who in 2012 made photo's of the site, all elements of the ensemble had disappeared in 2017.