The Eiffel Tower is a beloved source of inspiration for creators of art environments. In a lot of sites this construction is reproduced, like in this one in Estonia.

Jaan Alliksoo (1961?) has never been in Paris and he knows the Eiffel Tower only from picture postcards and the internet. He lives on the isle of Hiiumaa, in size the second isle of Estonia, situated in the northwestern part of the country, in the Baltic Sea, between Estonia and Sweden.

Alliksoo, who has a job as a constructor of wooden furniture and garden utensils and has no architectural training, single-handedly constructed this high-rising wooden replica of the Eiffel tower, which is situated in the garden around his house. 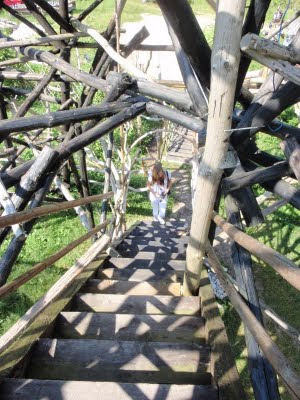 A history of many towers

It is a recent construction but the local and family history says there were predecessors.

The family house is located close to the sea, and the tradition has it that some 300 years ago there used to be a fake lighthouse nearby, run by a count Egelhard, a construction meant to fatally attract ships to the shore, to rob them (and kill the sailors).

This may be true or not, in the beginning of the 19th century, for sure there was a tower in situ. Alliksoo remembers very well the story of his aunt, who told him that in 1915 she climbed a tower situated near the family house.

This one has not stood the years and has disappeared,

In 1978 Alliksoo, at the age of 17,  constructed a new, 17.5 m high tower meant to watch the cattle in the neighbouring meadows. This one lasted for some nine years. and then had served its time.

So Alliksoo constructed another tower, which lasted until 1997.

Alliksoo's latest tower is the one nowadays still present, named Hiiumaa Eiffel, realized within four months and finished in 2007. The 31,4 m high tower is a 1:10 replica of the one in Paris, made from juniper wood. It's parts are fixed together with iron nails and ropes.

Alliksoo relates that he made this creation to the memory of his wife, who had passed away. The idea to copy the Eiffel tower was spontaneous, but, as he says on one of his websites: "Paris and the Eiffel Tower everywhere in the world are associated with l'amour".

Dispute with the local authorities

The tower had been erected without any building permit and the local authorities, not convinced of its safety, in 2008 initiated a procedure to achieve breakdown of the tower.

This has been going on for some years. At one moment the authorities seem to have accepted a status quo, stability and safety test have been performed and according to a July 2012 newspaper report (not available anymore on the internet) the building permit retroactively has been granted.

The story of Hiiumaa's Eiffel Tower has been related in Estonian newspapers and on television (not only Estonian TV, the BBC and Russian TV also came by). The publicity resulted in thousands of tourists who visited the site during the last years. The project also has raised interest in Estonian artistic circles.

Recent new constructions
transformed the site into a amusement park

The picture above, taken from the Eiffel Tower, shows that the site has recently been extended with some new constructions, partly with a fairytale character, as the picture below shows.

The site thus has acquired the character of an amusement park, which can be expected to meet the expectations of the approximately 30,000 tourists who now are visiting the site every year.. 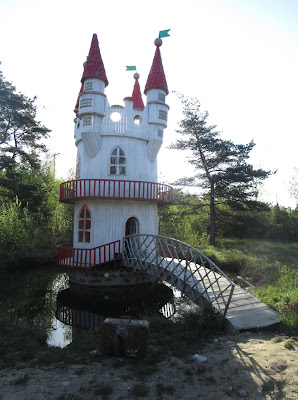 In the fairytale castle there is also an apartment that can be rented as a holiday home.