On the southwestern shore of Lake Lappajärvi in Finland, in the community of Ylipää, there is a creative complex which comprises a sculpture park, a cave with over fifty rock paintings, a troll's castle and a church.
Life and works

This complex was established in his free time by police officer Tapio Autio (b. 1956).
He began his creative activities in the mid 1980s, making sculptures from concrete he displayed in the garden around his house.

These sculptures represented all kind of animals and personalities, like Adam and Eve. His portrayal of biblical couple might rank as the largest concrete sculpture by an outsider artist in Finland. 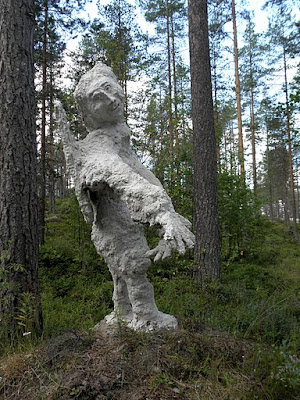 In 1995 in an area at some distance of his home Autio began constructing two specific buildings, a castle and a church.

The decorations in the church have a biblical connotation.

The two interiors are kind of dualistic. The castle represents the dark side of our life, wild, pagan, evil..... the church represents the good, christian, civilized side. This dualism of powers reigns human life, a battle between good and evil.. For Autio this means that during life, one has to try to find one's deepest self, some Christianity, some paganism. 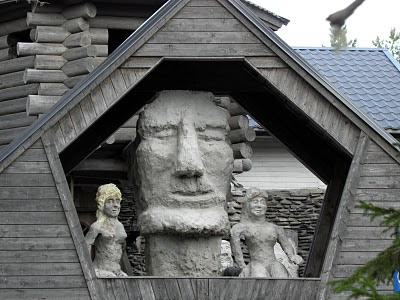 sculptures at the castle

When Autio shows visitors around, he will wear a white dress when visiting the castle, in the church it will be a black one. ....dualism....

From the spot where church and castle are located one will have a nice look on the surrounding landscape, a view which will be even nicer from the top of a 16 m high tower constructed by Autio, where one has a view upon the nearby lake.

In the cave, paintings on the wall -"rock paintings" one could say- depict scenes and themes from the Kalevala, so of course this work has been featured in an exposition in Espoo, Finland (2010/11), dedicated to the influence of the Kalevala upon outsider artists in Finland. 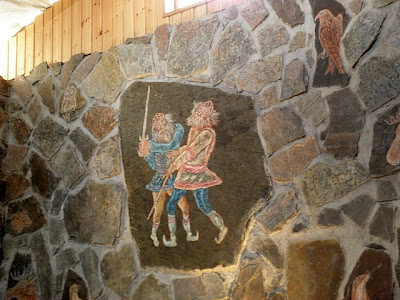 The site can be visited by the public in the summer months. The church is available for marriage ceremonies.
In 2016 Autio retired from his job with the police, where he had worked for over thirty years.