It is not a replica, it's just a fantasy structure with decorative elements which evoke a Russian basilica.

This art environment, a creation by Ger Leegwater (b. 1945) known as the Kremlin in the Netherlands, arises in the rather large backyard of his house at the outskirts of the small community of Winkel in the green, grassy area of  the province of North-Holland, Netherlands.

A sheet metal worker, not trained in architecture or construction works, Leegwater began this project around 1989/1990 using all kinds of excess and demolition materials. Over 25 years later he is still going strong and creating new structures. Currently (2017) in his early seventies, he once said that in case he might be not so fit anymore at older age, he always could do mosaics.....

Before Leegwater began his project he had made holiday trips to Italy and like other builders of castle-like structures he became fascinated by Roman architecture and the classics. 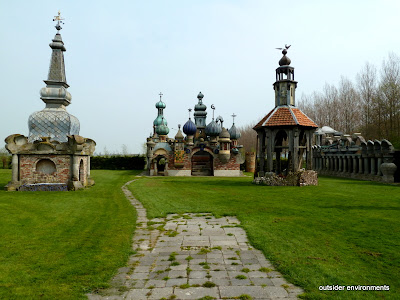 The main structure, the Basilica covers an area of 14 x 16 m and is 10 m high. It is flanked by a number of smaller structures, like corridors, arches, walls and a chapel (which also is available for marriage ceremonies). 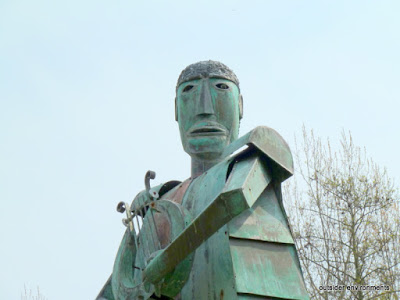 The site has a variety of sculptures made from sheet metal, such as a scene of Saint George and the Dragon, a statue of the archangel Michael and a sculpture of Orpheus (above).

Around 2015 a new large structure was completed, the Neptune Fountain, which is decorated with sculptures of Neptune, Pegasus and a Triton.

Then Leegwater started a new project, the Campanile, a structure shaped like a tower, built on sloping columns, with an oculus (a circular window) on top and Atlants (columns in the form of a man) at the four corners at the outside. This project was completed in 2017.

Constructing the structures of this art environment began without any formal building permit, but the local authorities, convinced of its safety and importance, have decided to legalize it.

On appointment Leegwater will host groups of interested people and school classes, which he informs about classic tales, mythology, the art of building and architecture.

Videos
* In a video on YouTube (December 2009), in two parts, Leegwater talks about his project (in Sutch).
A transcript in English of this presentation is available on OEE texts.