Above wooden structure was realized in 1986 by Ben Wilson in the woods near the community of New Barnet, north of London. It doesn't exist anymore.

Ben Wilson was born in 1963 in Cambridge. The family moved to New Barnet. It was an artistic family, and young  Wilson probably felt attracted to making art. However he was not very much inspired by formal art courses. Instead of following the lessons at the Middlesex Polytechnic, he would rather wander in the woods.


So he followed his own direction, going out in the nature and making large sculptures from materials which are freely available in the woods. He made all kinds of big wooden personalities, chapel like structures, and so on.

In an interview he said:

Using materials I could find in the woods I built a giant’s environment… a big wooden chair, a tower, a giant male figure and a table about ten feet high. It was a whole sculptural environment with a walkway connecting the various parts. No one knew I was doing it… I was trying to let the work evolve out of the place.

So in the 1980s, 1990s and the early years of the 21st century Ben Wilson mainly focused upon making wooden creations, often large constructions realized on the spot in the open air, but  he also made smaller creations by carving and painting found wooden materials.

In 2003 Wilson made a trip to Finland, where he created a wooden structure for the Kaustinen Folk Art Museum. 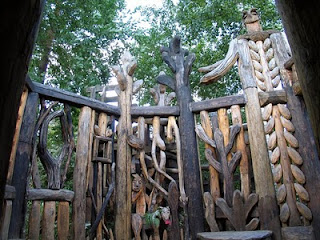 The picture above and the one below give an idea of the wooden creation, that depicted a chapel


From 2003-2004, working in a local London coffee shop, Wilson made a series of black and white paintings.

His creative activity, mainly his work with wooden structures,  earned him some fame in the circle of outsider art enthusiasts in the United Kingdom. So he was one of the artists selected to participate in the British Outsider Art exposition (curated by Julia Elmore) in the Halle Saint Pierre in Paris (2008).

By that time, however, Ben Wilson had been looking for other ways of artistic expression. He tried graffiti by decorating public bill boards, but this would give him a lot of problems with the police.
Chewing gum man

In 2004 he began decorating small pieces of chewing gum that were dropped on the street. This wouldn't cause a problem with the police, as long as he applied the paint just to the slice of gum and left the underlying pavement -public property- untouched.
Because he worked on location, lying on the street, he attracted a lot of attention from passersby and got publicity from a point of view of "human interest".

This he has been doing since, creating some 10.000 small decorations on the pavement, starting in New Barnet and then heading towards central London.  A November 2010 BBC video shows him at work in the streets.

Making these small pieces of visual art can be seen as a very special variety of street art.

Anyhow, Ben Wilson in a creative way is redefining his place of living (and reading the interview on Christina's blog, one can notice that by doing this he gets into close contact with people around, policemen, residents, youngsters, shopkeepers....).

Like other creations in the realm of art environments, these decorated chewing gums might not withstand the test of time, what also happened to the wooden structures in the woods, which  already have disappeared.

Documentation
* article on Wikipedia
* an interview with Ben Wilson (September 2009) on Christina's blog
* gallery of decorated chewing gums (2012) on Flickr (one out of a number)
* pictures of the decorated chewing gum on Instagram via #benwilsonchewinggumman
Video
* video by Sara Pigozo Beautiful chewing gum (YouTube, 9'09", uploaded March 2014)


An exposition
* Julia Elmore curated an exposition (September-November 2011) at The Nellie Dean of Soho in Dean Street, London, with a giant wooden figure and his pastel drawings made between 1999 and 2001 (see comments)

Ben Wilson
Wooden structures/decorated chewing gums
in and around New Barnet, Greater London, England, UK
structures in the woods do not exist anymore