Every December in the Western world one finds preparations for Christmas time, like illuminating one's house.

This post is about an art environment in the capacity of a very large illuminated nativity scene on a hill near the community of Manarola, a community at the Ligurian coast, Italy. Every year early December the lights will be activated for the first time, which currently attracts thousands of visitors.

This scene has been created by retired railway worker Mario Andreoli (1928-2022).

In 1961, at his father's request,  he restored a cross that was located on the hill on top of the family vineyard. He also installed some devices in order to illuminate the cross at night.

When local people informed him there happened to be two more crosses on this spot, he could trace their foundations and he re-erected these crosses too. Ever since the spot locally has become known as the Tre Crocci hill.

After Andreoli got retired, probably in the 1980s, he could buy more land on the hill.

He already liked to make small sculptures with a religious connotation, but once he owned a large part of the hill,  he also began making larger constructions to decorate the area with what in Italy is called a presepe, a Christmas crib scene.

From recycled materials Andreoli constructed all types of larger than life two-dimensional impersonations of shepherds, angels, dolphins and so on. 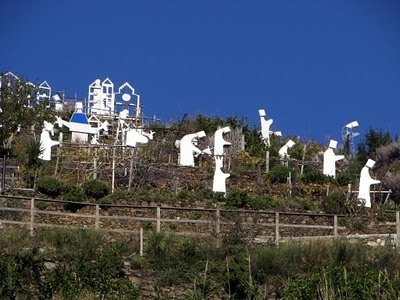 In the course of the years the scene gradually has been extended and in the past decades when December approaches, Andreoli would install some 300 figures on that hilly vineyard which covers an area of some 4000 m² .Together they constituted a large Christmas scene, which because it is illuminated, best can be appreciated in the dark.

In recent years, Andreoli's nativity scene has become part and parcel of the cultural heritage and the festivities of the region.

The community of Manarola (on the UNESCO heritage list) is located in the Parco Nazionale delle Cinque Terre. The board of the park supported Andreoli financially and it promoted sustainability by ensuring that the installation operates on solar energy.

At inauguration day, early December, lots of people would come to Manarola, to enjoy fireworks and to witness the moment the around 15.000 lamps will be actuated for the first time.

The illumination would last through January. During the other months of the year, the constructions would be stored.
Early November 2017 the association Presepe di Manarola Mario Andreoli was formally established, which aims to enhance the nature and environment of Manarola, and in particular the organization and annual implementation of the illuminated Christmas scene.
Mario Andreoli died on December 22, 2022 at age 94. He was weakened and could no longer install the illumination himself. The aforementioned association is now taking care of this, and the light festival takes place as in all previous years..
.Andreoli's studio

Andreoli had a studio where he created the characters and items that decorate the Christmas scene.


And the garden near his house and studio had a display of a number of his smaller creations. 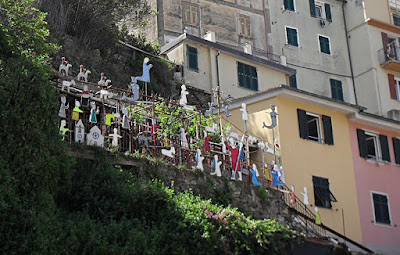 Mario Andreoli's creative activity was featured in an exposition in the gallery Rizomi Art Brut from November 25 2011 until January 15 2012. This art gallery in Turin is he first in Italy which focuses exclusively on art brut/outsider art.
The exposition, entitled Liguria Brut! also presented works of Marcello Cammi, Davide Mansueto Raggio and Vittoria Rullo.

Next picture shows part of the exposition where Mario Andreoli was represented:

Some documentation
* Article with a variety of pictures on the website Costruttori di Babele
* Video (December 2012) by Constantino Bormioli (YouTube, 5'28")