Le Moulin Joyeux... no this post is not about the famous bar in Montmartre (Paris)...

It is about a former art environment in the community of  Loué, in the Pays de la Loire region, between the cities of le Mans and Laval. Loué is famous too, but then because of it's poultry.

In 1947 Albert Chasseray (1884-1976) settled in Loué. He was born in that community, but had a career in Paris, where he was an actor at the Comédie Française, appearing in plays of Molière.

In Loué he had some problems with the landlord. So he moved over to a house, which he had constructed on a plot of land he owned, at the entrance of the community.

On this terrain he began constructing an art environment. The original idea probably was to make kind of an open air theatre, with an open air bar, so this might be why the site has been named after the Paris bar/cabaret Moulin joyeux.

The site however got a more fairytale character when Chasseray added sculptures of Snow White, dwarfs and gnomes, much to the pleasure of the youngsters of Loué. 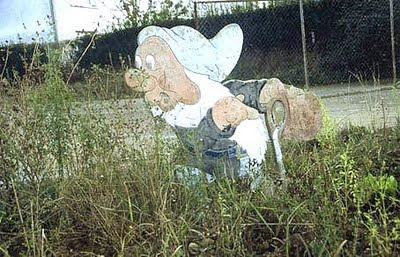 He also made a don Quixote, a windmill and other constructions.

But the main feature of the site became a full scale dragon, made of concrete, some 15 meters high.

I do not know if this was because of some frictions in Chasseray's relation with the locals, but it was his intention that the the dragon would spit fire in the direction of the village. However, lacking the technical skills to achieve this, he had to make do with a jet of water from a garden hose.

The site has been demolished

Chasseray died in 1976. He lived alone and the site was left unattended for. The pictures in this post, by Michel Leroux, have been made around 1984.

Just in time, because in 1985 the site was demolished by the new owner of the property, someone from the village living nearby, who evidently was not amused by the constructions in his outlook.

It has been related that the destruction of the site was observed by children at the nearby school, who were upset by the event, fans as they were of the fairytale characters of the site. 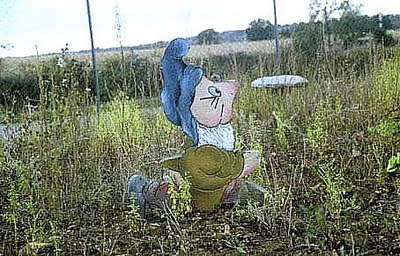 One of the children succeeded in saving a number of the smaller items. Since 2004 Vincent from Loué owns the plot and with his association Laguz he wants to achieve a reconstruction of the environment and to collect as much information and documentation as possible about the Moulin Joyeux site.