Visiting some environments in northern France with Laurent Jacquy

My internet friend Laurent Jacquy from Amiens, France, who is the editor of a very complete website about Bodan Litnianski, early 2011 started a blog, named Les beaux dimanches

His blog is kind of an illustrated magazine of the Club Des Chercheurs Et Des Curieux, the Club of the researchers and the curious (subdivision of the singular, the irregular and the organised disorder).

Just what I do like very much. And periodically les beaux dimanches will have nice stories about outsider art environments

Visiting some environments in northern France

So let's go and make a trip along some of the art environments in northern France described by  Laurent in his blog and in personal communication.

Avesnes-sur-Helpe is a small city in the western part of the Nord department, not far from the Belgian border. There you can see this front of a house, decorated with all kinds of (farmers) utensils.

The picture in the top of this post shows a detail.

There is no further information available about who made this, or when.

Next let's go to the community of l'Étoile, which is located in the Somme department, close to the area with the multitude of ponds near the Somme river.


There, another decorated front of a house can be discovered. It is a very modest one, but it is nice in its simplicity, with sculpted animals and low-reliefs of painted cement.

Once more, there is no information available about who made this and when. 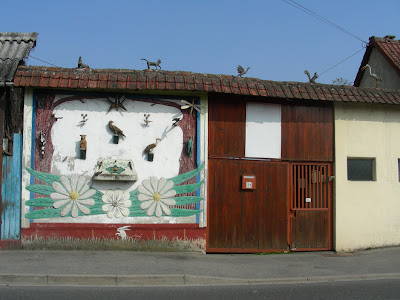 Next stop. Quesnoy sur Airaines, a community which is also in the Somme area.

Mr Goldon began creating the site in 1965. It is mentioned by Francis David in his Guide de l'art insolite Nord/Pas de Calais, Paris (Ed Herscher), 1984 (This book, incidentally, nowadays can be bought antiquarian for over two hundred euros).
Francis David in 1983 made photos of Goldoni's decorated house, in 2018 published on the website Habitants-Paysagistes.


In his post Laurent has noted that over the years the site has changed: some wooden structures were removed, new sculptures were added and all sculptures have been freshly painted

++Maybe the house got a new occupant, who continued what Goldoni started, adding his or her own creative constructions. However, no details about who and when are available.

Next and last stop of this trip is Berck-sur-mer, a seaside resort in the Pas-de-Calais department.

Here a maison insolite can be found, which looks like this:

When I wrote this post in April 2011 I didn't have the information that later became available, as incorporated in a separate post about Joseph Meyer's creation of September 8, 2014.

All credits for this trip around some art environments in the north of France to the author of weblog les Beaux Dimanches. Thanks, Laurent.