Gravelines from old is a fortified city and fishing town in the far north of France, near Dunkirk.

Offshore, in 1588, the decisive battle of the English against the Spanish Armada was fought. Currently, the city has a charming old towncentre, a major seaport, extensive industrial areas and a large nuclear plant.

And it had an art environment: the Jardin aux jouets, the toy garden, located in an open area, somewhat outside the community, along a departmental road.

The author of this environment, Cyril Roussel (b.1938), lived there, together with his son, in a mobile home. 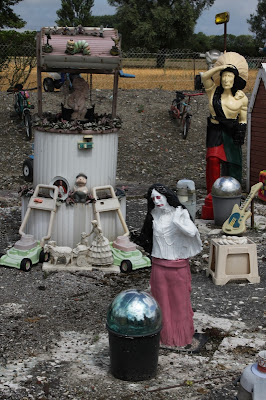 I could not trace many biographical details. As far as I understand Roussel was born in Gravelines, had a job in a slaughterhouse, maybe was a truck-driver and he settled in the 1990s on the plot of land where the toy garden would be created.

Without any preconceived concept, the collection of toys gradually grew into a lively exposition of all kinds of puppets, statues, toys and objets trouvés, some of them painted in bright colors or dressed up in fanciful clothes.

Once the inhabitants of Gravelines had learned about the site, they would visit it, bringing articles from their households they wanted to get rid of. Cyril Roussel, not inclined to refuse gifts, added all of these items to his collection.

Although many people liked to visit this very special garden, as reported in August 2014 by a reader of this post, the Jardin aux jouets doesn't exist anymore (see comments).

Up to now I couldn't discover why this happened. Maybe some people looked upon this garden as a pile of garbage and actually succeeded in realizing its closure.