The pictures in this post have been derived from a Spanish touristic photo website and indeed, this art environment is located in a touristic spot: the Spanish isle of Menorca, off coast in the Mediterranean.

Nicolás Cabrisas Gili, who is the author of this site, was born in 1916 in a family of modest means in Menorca. Large scale tourist industry had not yet developed and young Nicolas got a job in the local shoe industry.

However, in 1966 at age 50 he could buy a cave, which he transformed into a bar, located in the community of Ciutadella, where around that time holidaymakers began to arrive. 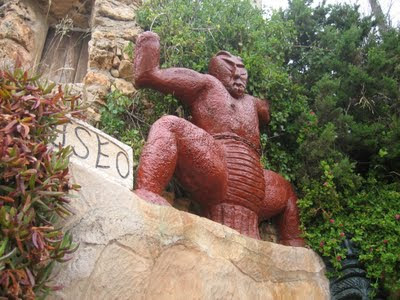 In 1970 Gili sold this cave/bar, to buy another one, on the coast, with sea view. He married a German lady and the couple would run bar and restaurant, located at the premises of the cave.

They also excavated the cave, to make room for kind of house, where they could reside.

Then, in 1973, Nicolás Gili began decorating the cave, making large sculptures, which were situated at the exterior, as can be seen on the pictures in this post.

The name of the site Cova de sa nacra  has to do with shells that decorate the interior. Nacra apparently is Spanish idiom for shells that in English are called bivalves (pelecypoda). The shells used to decorate the cave can be some 50 cm large.

Gili has been active in embellishing the cave for some seventeen years, working on it until 1990. 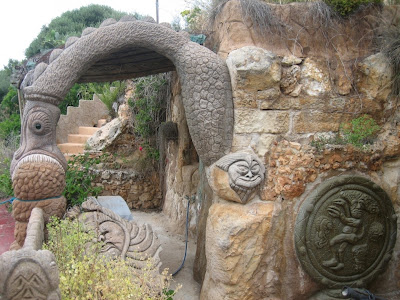 He also had adopted an artist name, calling himself Kyana. He presented himself as a sculptor and visual artist, making paintings he offered for sale..

The Cova de sa nacra has become a touristic spot, where people can enjoy the beautiful view and have a meal.