On April 23, 2011, this weblog had a post entitled Visiting some environments in northern France with Laurent Jacquy. This post listed a number of art environments in Northern France, based on the information collected by Laurent Jacquy in his weblog Les Beaux Dimanches.
Among the sites reviewed in this article are those by Joseph Meyer en Monsieur Goldoni. It so happened that at the beginning of September 2014, Joseph Meyer, who built a castle in the outer space of his house in Berck-Plage, got his own review.
And now it's Monsieur Goldoni's turn to get his own review.
Life and work
Mario Goldoni (1922-1994) was born on January 16, 1922 in San-Possidonio, a city in the north of Italy.
He became a craftsman, mainly working as a mason, and emigrated to France in his mid-20s, after the end of the Second World War when France could use a large workforce.
His permanent residence in France became Quesnoy-sur-Airaines, a small commune with 475 inhabitants (2005) in the Somme area in Northern France. He married a French woman and had six children. His wife died before all the children had grown up and Goldoni was largely responsible for their upbringing.
In 1965, when Goldoni was in his early 40s and had become a widower, he began to transform the garden on the street side of his house into an art environment by placing all kinds of creations there, both made of wood and cement.
The very first image in this post, made around 1982 by Francis David and published in his book Guide de l’art insolite Nord/Pas-de-Calais (1984), gives an impression of the nature and extent of the decorations that were added to the site over the previous 15+ years.

We see a variety of wooden creations, such as a windmill and some houses and tower-like small buildings, there is a scene with snow white and gnomes grouped in front of two cylindrical towers. Goldoni was busy making the creations in the evenings, when the children were asleep.
After Goldoni died at the age of 72 on August 29, 1994, the size of the art environment, which had already existed for almost thirty years, began to decline. Due to lack of maintenance and vandalism, the wooden structures disappeared and small sculptures were also stolen.
The second photo from above, which presents the situation of garden and house in 2011, shows how little had remained of the originally lavishly decorated garden.
However, the decorations above the door and on the facade of the house are still untouched and the sculpture of a young lady is unmistakably present (although the color of her clothes has changed).

The latter also applies to the situation in 2022 when Sonia Terhzaz visited the site.
The decorations around the entrance door, the sculpture of the young lady and the characters standing in the background were still in good condition. 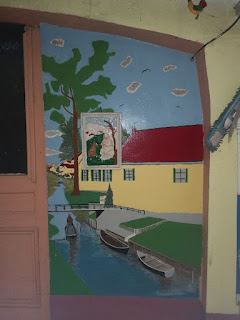 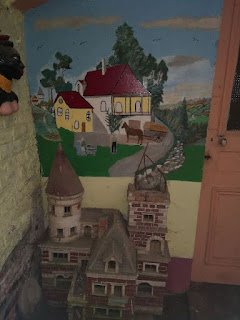 This also applies to the decorations in the interior of the house, which, as it turned out, was inhabited by Marie-Hélène, a daughter of Goldoni, 64 years old in 2022.
Sonia was welcome to visit the interior and take pictures of paintings and decorations made by Goldoni,
It turned out that Marie-Héléne, who was still saddened by the passing of her father, in many ways was involved in the maintenance of the artistic legacy, for example, by recoloring items whose paint has faded.
The floors of the house were apparently paved by Goldoni himself, using dissimilar cement tiles, which gave the house a special atmosphere of its own. 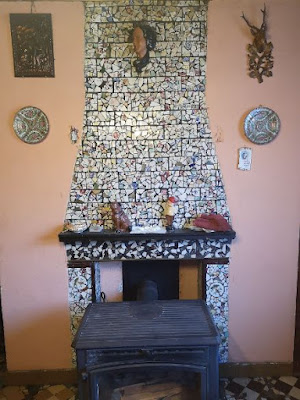 The five surrounding photos give an impression of Goldoni's decorations as they are in the interior, with in the top right photo not only a painting, but also a collection of miniatures with the same appearance as the castle-like structures that decorated the garden.
Then, pictured above, there is a decorative mantelpiece, surrounded by smaller creations.
Below are two small paintings in a round frame, which seem to evoke the atmosphere of a cozy family gathering, perhaps for Goldoni a reminder of earlier times. 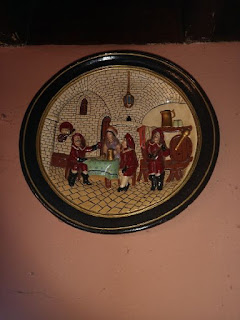 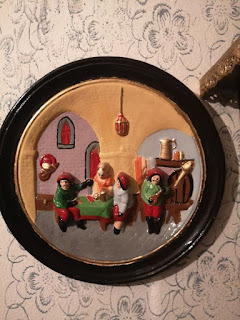