Actually, it is not a fairytale house, but the shelter of a homeless man who has found a pitch in a wooded greenbelt along a river to live in. The structure is so imaginatively put together that it evokes the endearment of walkers and people in the area.

More about this site
The fairytale house is situated along the River Touch, which flows through Tournefeuille, a commune of about 28,000 inhabitants in the south of France, bordering Toulouse.

The extraordinary structure was created by Monsieur David when he was in his early 50s. For privacy reasons, his full name has not been disclosed. He worked as an animator in campsites and recreation centers.
The story begins in 2021 when Monsieur David, upon returning from his seasonal work, discovers that squatters have taken up residence in his house (which in all probability is located in the city of Toulouse). He is a tenant himself, but does not want a fight, leaves the house and ends up on the street.
He then built a first hut near the Garonne river, a wide river that flows through the city of Toulouse. When the river jumped out of its bed in January 2022 due to ever-rising water, he had to look for another place, which he found along the river Touch. 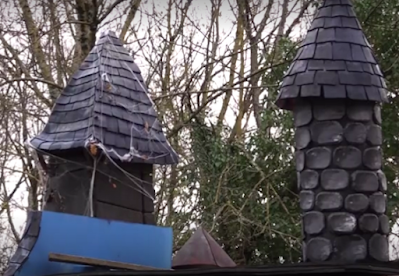 The most striking elements of the exterior of the structure he erected on the new site, are the gray tinted plates that cover walls, roofs and small towers. They look like they are made of slate, but the material used is foam rubber, which he found in a dumpster. This material was carefully cut out in the form of strips or tiles, depending on the place of use, and finally gray tinted with acrylic paint.
The roof of the house with turrets, windpipes and chimneys has an undulating allure, which can be seen in fairy tale books, but rarely in the reality of a wooded area
The fairy house has intricate skylights from which cobwebs fall, and it is surrounded by a picturesque imitation wooden fence, lined with 2 meter high lampposts to the left and right.
The project was completed in April 2022 and Monsieur David was able to move into the house.
Monsieur David is quite a discrete person and he is rarely seen around the house during the day. However, it also has been reported that in the summer of 2022 he organized workshops for children on Sundays in making figurines.
At the end of the year 2022, after the municipality understood that someone was living in the fairytale house, Monsieur David got a formal notice that he had to leave the building, also due to the risk of fire, a notice that will not be implemented for the time being, pending further consultation between Monsieur David and the municipal social service. 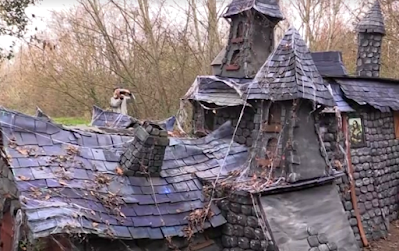 Documentation
* Article (January 2, 2023) in regional newspaper La Dépêche, with video
* Article (December 28, 2022) in local newspaper Actu Toulouse
Video
* Video by Manon Haussy, published in above article in La Dépêche
Monsieur David
Fairytale House
on a spot along the river Trout in Tournefeuille, dept Haute-Garonne, region Occitanie, France
can be seen from the road
Posted by henk van es at 2:34 PM