An interesting art environment to start the new year.

The image above shows a site that doesn't appear in French publications with an inventory character and, as far as can be ascertained, it also hasn't been mentioned in the local and regional press.

This art environment, located in the small French commune of Lapeyrouse-Mornay, was discovered by Sonia Terhzaz from Paris, about whom more in the documentation at the end of his post 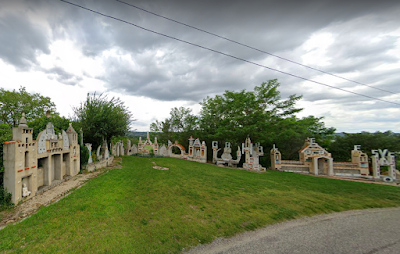 André Muetton, who created this art environment, was born in the mid 1940s as the son of a farmer. After primary school, at age 16, he started working as a mason, a job he held until his retirement in 2004.

In the 1950s and 1960s, he and his wife lived in a fairly small farm some 15 km from Lapeyrouse-Mornay, the community where he lives today, in the immediate vicinity of his creation.

He told Sonia Terhzaz, who interviewed him, that as a bricklayer he enjoyed being engaged in making built structures. Building was a pleasure for him. So, the first years of his retirement were spent renovating the house in Lapeyrouse-Mornay. 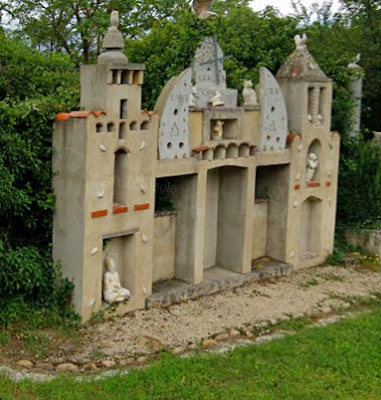 Near Muetton's house, along a through road, there was a piece of land, unused, except for the occasional rubble and other rubbish people deposited there. After he had renovated his house Muetton decided to embellish this site with some brickwork, a project he started in 2013.

He cleaned up the mess and on the now level lawn he built in a V-shape, the open side facing the road over a length of some ten meter, an ensemble of about ten self-contained but interconnected small facades, all with about the same height, but different in shape and design..Muetton did not make any sketches beforehand, because what he wanted to make was in his thoughts, as is the case with many non-professional artists.

Stones and other building material were found in the area, which is also rich in pebbles that were used as decorative items. Each of the facades was given its own design and was decorated in its own specific way, for example with niches with seated characters, small turrets at the top, columns, arcades, colored tiles.

A striking form of decoration, not yet found in art environments elsewhere, is the decoration of some facades with large letters, such as C, V, S and others. These letters stand for certain values that are dear to Muetton. They are written out in the caption of the photo below

The art environment is now considered completed (2022), also because Muetton is hindered by arthritis from doing heavy work. He limits himself to carrying out maintenance.

Documentation
* The only available source about this art environment is an article (December 20, 2022) by Sonia Terhzaz on the FB page of  the French Association Patrimoines Irréguliers de France (PIF)
- Sonia Terhzaz is manager of the Parisian cafe Chair de Poule and arranges the musical, cultural and sporting events that take place there. She is active in the inventory of art environments in France and has already provided several articles to PIF with a description of a site and an interview with the artist or artists who created it (for example Henri Galtier, La ferme aux épouvantails et Utopix).
Andrew Muetton
Architectural ensemble
201 Route du Châtaignier, Lapeyrouse-Mornay, dept Drôme,
region Auvergne-Rhône-Alpes, France
can be seen from the road
Google Streetview
Posted by henk van es at 4:08 PM