Nevelsk is a port city in the Far East of Russia with about 12,000 inhabitants (2010), located on the southwestern coast of the island of Sakhalin ¹

Along a busy road just outside the city, there is a special creation in the form of an extensive collection of dolls arranged along the street, in the yard and in the trees belonging to the house located on the plot. 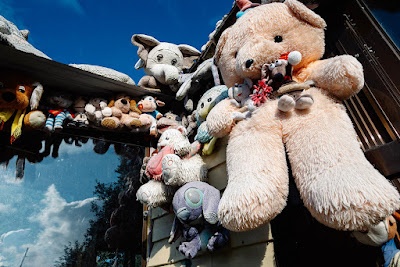 This collection was created in 2014 by Yuri Vladimirovich Sidorov, who was born in 1955 and all his life has lived in Nevelsk.

He had a job as a chief engineer on ships and then until his retirement he was an electrician in the company Rostelecom.

Sidorov acquired what would later become the house with the dolls in the early 1990s as a summer cottage. Around 2012, he and his wife Vera decided to live there all year round, because due to back surgery she had trouble climbing stairs in the flat where they lived.

The couple had four children and (in 2017) six grandchildren. 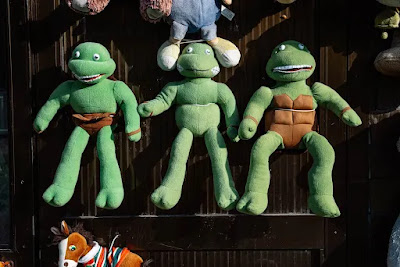 Decorating the house with dolls started in 2014. A grandson was found to have an allergy to a dust mite who loved soft toys and on medical advice all toy bears and dolls had to be removed from the house.

At first it seemed a good idea to donate the dolls to an orphanage in the area, but that was not possible because of hygienic standards.Then grandfather Sidorov came up with the idea of giving the dolls a place on the fence at the front of the summer house.

The collection of dolls, initially small in size, grew to about a hundred in 2021. Local residents and people from the city brought surplus toys. Sometimes they threw seven dolls at a time over the fence.

The collection, which includes all sizes of dolls, is not only displayed on the street side, but also on the fence along the side of the front garden. There is also a tree in the front yard, which is filled from head to toe with dolls.

Besides dolls there are also very large teddy bears and -lying on a fence- there is a large spotted dog, .

A lady from Japan brought a lion cub and asked to place it as high as possible, because after all, a lion is the king of animals.. 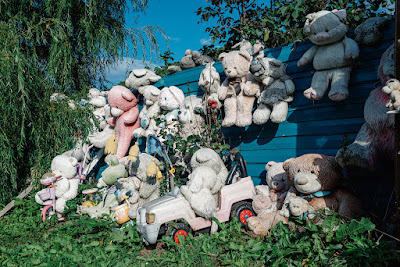 can be seen from the road
Posted by henk van es at 4:30 PM

Email ThisBlogThis!Share to TwitterShare to FacebookShare to Pinterest
Labels: exterior decorated with dolls