The creative arrangement pictured above, gives an impression of the kind of artwork Tracey "PicaPica" Shough produces and shows in a variety of places in an around the French department of Creuse, where she lives in the small community of Chabrais, north-east of Clermont-Ferrand. The four images around show parts of an installation at a festival Les Sarabandes in Charente
Life and works
Tracey Shough was born in Birmingham, a city located in the Midlands in England. After her primary and secondary education she attended Dartington College of Arts near Totnes in Devon, South West England where she studied art from 1989-1992
From 2001 to 2007 she was affiliated with the Scottish organization Wild at Art which allowed artists from elsewhere to work and gain further experience in Scotland. Here she collaborated with schools and associations to create large-format artworks and other forms of art.Together with groups of children, she carried out projects in which walls were provided with colorful paintings.
For example, in 2007 she made a mural called The Long Goodbye, decorating the walls of the entrance and the platform buildings in the station of Invergordon, a small community along (an inlet of) the North Sea, in the north of Scotland.

The mural depicts the story of the Seaforth Highlanders, 51st Highland Division, who left for France in World War II, fought there and, on retreat, ended up in St. Valery-en-Caux, where they were unable to make the crossing to England and were captured. A beautifully illustrated description of the project can be found on this website.
A crossing to France
After her activities in Scotland, around 2008 Tracey Shough left for France, where she would live to this day, displaying an extraordinary creative entrepreneurial spirit.
In doing so, she took a different direction artistically. In Scotland she made realistic murals and paintings, in France she started making art inspired by the series of TV broadcasts in 1998 by Jarvis Cocker entitled Journeys into the Outside in which he visited art environments, mainly those created by outsider artists. Tracey Shough herself also visited a number of art environments in and outside France.
Although Tracey is a professional artist, her distinct affinity for outsider art and her involvement in the creation of art environments warrants a review of her creative work in this weblog. Not only the interest in outsider art is characteristic of her further development as an artist, also the reuse of objects and the reduction of waste became an important theme in her work. From 2009 she took part in the collective Pica Pica that focused on these items. 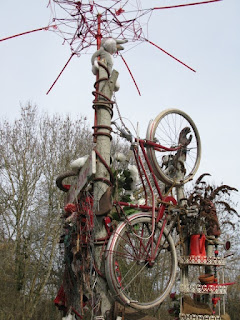 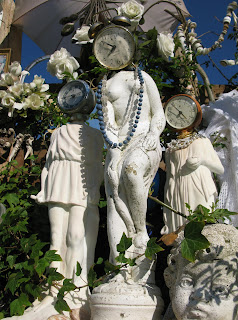 Over the past around thirteen years, besides decorating the backyard of her house, Tracey Shough has created an extensive collection of artworks, ranging from assemblages and installations to smaller items, such as small art in boxes,  necklaces and bags.
The four images around give an impression of these creations (photos from her FB page) 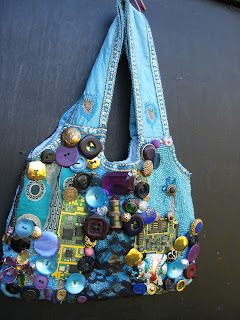 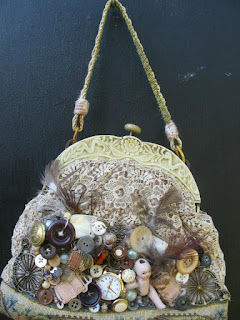 In addition to Tracey's activity as a visual artist, it is also an important part of her activities to organize expositions, motivate others and help them making artworks without using new materials.
The sculpture garden of the Association Pica Pica
A  recent initiative taken by Tracy and some of her friends in the field of art, such as the artists Adam Varley and Ann Hollande, is the founding of an association that manages an art environment in the quality of a sculpture garden, called Jardin de Pies (Garden of the magpies).
The sculpture garden, currently in a first stage of development, is located in the hamlet of Peyroux-Vieux, a few km from Saint-Cabrais. Although the backyard of Tracey's house will also contain various creations, this is the garden she focuses on for the coming years
And of course, the sculptures are made of all kinds of materials that are no longer used or have become waste, in France often referred to as récup. 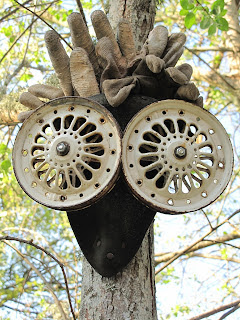 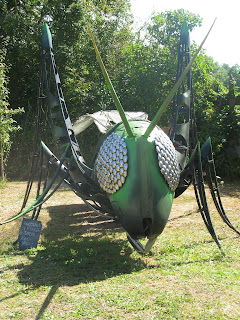 Located in a beautiful setting, he garden is surrounded by hedges and meadows, which are disappearing at a worrying rate and this is what the designers of the garden also want to draw attention to. 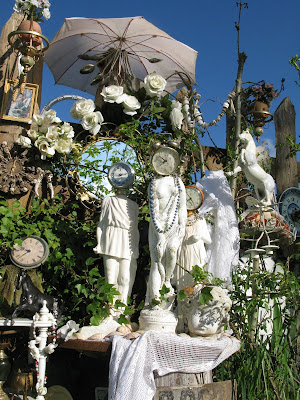 Documentation
* Website and FB page of Tracey Shough
* Weblog of the Association Pica Pica, with a page about the Jardin de Pies
Video
* Video (YouTube, 3'40") of an exhibition (February 2021) in the Creuse Confluence media-library, with commentary by Tracey Slough