The image above shows a wooden sculpture depicting Russian astronaut Yuri Gagarin, as he could be seen in 2002 with arms flailing, standing on a pole in the garden of a house in the hamlet Vacarino, located in a beautiful area in the Tver region, a kilometer away from a turnoff halfway the M11 motorway between Moscow and St Petersburg

At that time the hamlet had only a few inhabitants, because most residents had sought their living and working elsewhere. Today (2022) no one lives there anymore 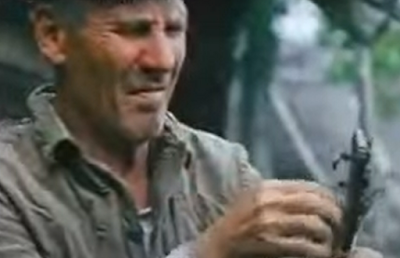 The wooden sculpture of Gagarin was created by Anatoly Alekseevich Varlamov, pictured above as he was filmed in 2002 for a video about him and his his art environment in Vacarino.

There is a limited number of articles devoted to him and his creations, all listed in the documentation, and none provides biographical information, so we don't know when and where he was born or in what year he died, like it is also unknown in what year and why he began to create the site.. 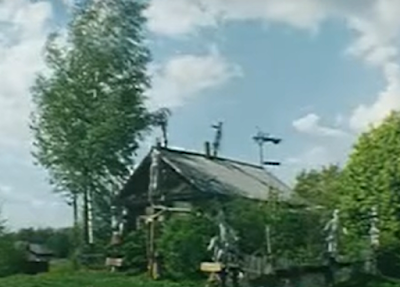 The house where Varlamov lived, was located on a small hill at the end of the village.

The photo above shows that the sculptures were situated on the roof of the house and in the garden. It's hard to tell them apart, but here are some more detailed images. 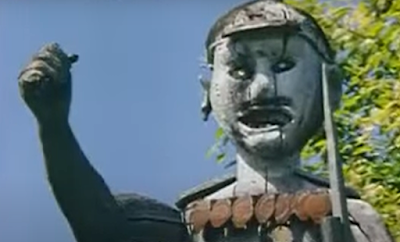 Varlamov used simple tools to transform the tree stumps he found in the area into sculptures. They therefore mainly have a little detailed look, what contributes to their charm.
His art environment mainly included historical characters associated with the origin and history of the Soviet Union.
The astronaut Yuri Gagarin has already been mentioned. The image above shows Joseph Stalin, with pipe and moustache.
There was a sculpture of a rider on horseback, depicting Vasily Ivanovich Chapaev, the hero of the Russian Civil War (1917-1922), as there was also a sculpture of Nikolai Aleksandrovich Shchors, an officer of the Russian Imperial Army, who became a commander in the Red Army during that civil war.

Other sculptures depicted the Russian fairy tale character Baba Yaga, a soldier, and other not so easy to identify personalities, such as the people in the plane below.
When in 2002 the video in the documentation was made, about half of the sculptures ever present were still intact. This video and the articles in the documentation provide a chronological sketch in text and photos of the decline of the art environment in Vacarino.
As noted in one of the articles, its creator, Anatoly Varlamov, has since passed away. 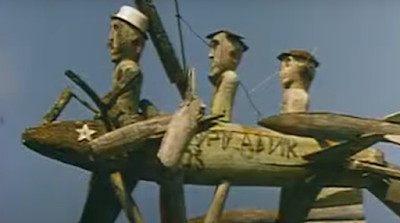 Documentation
* Article (May 2018) in Live Journal by Andrey Sinyushkin, with a report of a visit to the hamlet and a variety of photos
* Article (June 2018) on weblog La Camorra, similar to the article above, but with one photo
* Article (June 2020) by Ilya Varlamov (no family) with many photos, including the interior of the abandoned house. When she visited the village there was only one inhabitant.
* Article (February 2021) on website Dzen by Alex Polyakov, who walked through a high layer of snow to Vacarino, and there had to realize that no sculptures were sticking out above the layer of snow anymore.
Video
* Video Varlamov's land (YouTube) made in 2002 by Film studio Fatherland directed by T. Karpakov