Avgust Ipavec, The priest and composer who created art environments in Lepena (Slovenia) and Vienna (Austria)

The house pictured above is located in Jelena, a small settlement in the outskirts of the municipality of Bovec in northwestern Slovenia, not far from the border with Italy. The municipality of about 3100 inhabitants is bisected by the Soča River which flows through a valley of the Julian Alps in a landscape of great natural beauty.
Life and works
This house is owned by Avgust Ipavec, who was born in 1940 and would follow a career with a striking combination of activities.
His family was poor, but when young Avgust turned out to have musical aptitude, his father bought him a piano, which he transported home in an ostrich cart. 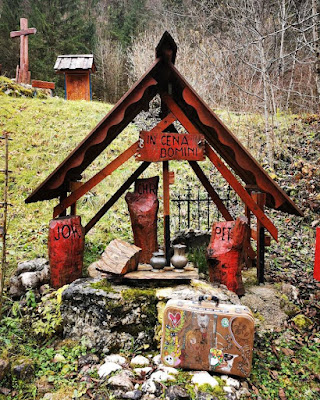 After his primary and secondary education, Avgust Ipavec went to study theology and trained as a priest in Ljubljana.

In 1966, when he was 26 years old, he was ordained a priest and then he worked for some ten years in various Slovenian parishes.

After ten years of priesthood in Slovenian parishes, Ipavec went to Vienna with the intention of staying for a year, to take lessons at the Vienna Academy of Music to expand his skills in composing music. 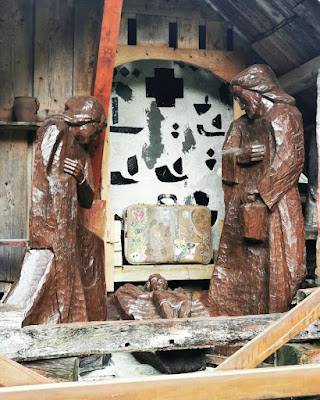 He was now in his late thirties and was faced with the question whether to devote the rest of his life to the priesthood or to music. A conversation with a professor from the academy convinced him that composing music and the priesthood are not mutually exclusive, but rather quite the opposite.

That turned out to be true in a job Ipavec got as hospital chaplain at Vienna's Otto-Wagner-Hospital.. Composing music and sensitive attention for sick people turned out to go so well together for Ipavec that he remained connected to the hospital for the rest of his life.

Living in Vienna, but also owning a house in Jelena, Slovenia, meant that Ipavec often traveled from one place to another.
In Lepena, surrounded by mountains and beautiful nature, he found distraction after the stressful work with patients. He built a chapel and enriched his garden with sculptures and wooden creations, with poems and texts referring to the World War I, which had ravaged the area.
In Vienna, in the garden of the hospital, Ipavec has created seven wooden panels that can be uplifting and comforting for patients in moments of hopelessness. In the rose garden near the tuberculosis pavilion it is written: For every recovery a rose", the panel depicted below welcomes visitors with: Du bist meine Sonne (You are my sun).

Ipavez's compositions are mainly written for large ensembles and include many oratorios, cantatas and masses, such as the Missa Populorum (Mass of the Nations) written in four languages

He was awarded the Golden Medal of Honor by the Republic of Austria in 2006 for his music. In 2017, Slovenia awarded him a Medal of Merit for his musical creations and the promotion of Slovenian culture abroad.

Documentation
* A report on Facebook by Tiramisu Bootfighter, who in the autumn of 2022,made a tour through Eastern Europe with his Galerie Ambulante, visiting Ipavec's art environment in mid-November.
* Overview of Ipavec's most important compositions on Österreichisches Musiklexion
* Interview (2019) with Ipavec in newspaper Delo
* Article  (2017) in the newspaper of the Archdiocese of Vienna
* Wikipedia
Video
*  To give an idea of Ipavec's music, here is a video of a performance of part 1 of his Requiem, as performed in 2009 in Drežnica, Slovakia, by the united choirs from the upper Pošoče region, conducted by Marko Munih (YouTube)
Avgust Ipavec
Chapel and decorated garden
Jelena, Slovakia
Decorated wooden panels in the garden of a hospital
Vienna, Austria
sites can be seen from the street
Posted by henk van es at 3:10 PM