Cebolleros is a small community in the province of Burgos, in the north of Spain.

This community has got some fame because of its castle, which was constructed single-handedly by Serafin Villarán (1935-1998).

He was born in the city of Burgos, the capital of the same-named province and he had a job as a welder in a factory. 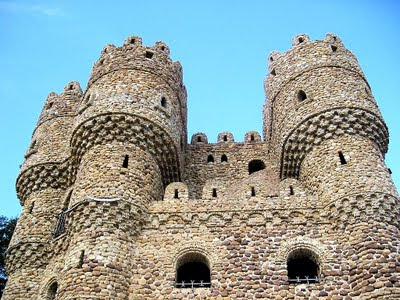 In 1977, when Villarán was some forty years old, he got the idea to construct a castle-like structure.

He used stones which he collected in nearby rivers, canto rodado in Spanish, pebbles which are rounded and have a smooth surface because of the erosion produced by the flow of the river. 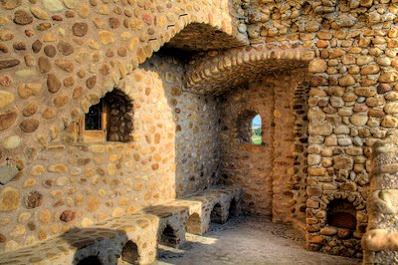 These typical stones, which are fixed together with concrete, give the walls of the construction its special appearance.

A member of the family has reported that Villarán, to enrich his inspiration, consulted books about castles in Spain and also magazines with pictures of these castles, Like other builders of singular architecture he probably began the project without a preconceived plan.

The structure as it is nowadays, has some five storeys. The space on the ground floor is equipped as a bar/bodega where people can meet. On the other levels one will find decorated rooms. On the first floor there is a lounge and the room on the third level has a big oven, which allows to prepare a lot of food.

The building has several circular towers with battlements. All together its exterior represents the image one has when one thinks of a fairy castle..... 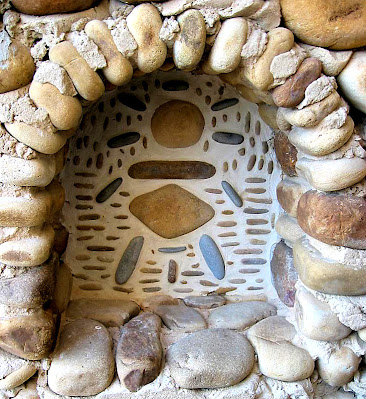 The interior has been decorated with small colored stones, arranged in mosaic or applied to lamps and small sculptures of birds and flowers.

Serafin Villarán died in 1998, before he could witness the final completion of his creative construction.

The project was continued by his son and daughter, Luis and Yoli. Visitors are welcome and can visit almost all spaces of the building (Entrance is free, but a donation to help cover the costs of maintaining the creation is welcome).
Situation late 2021 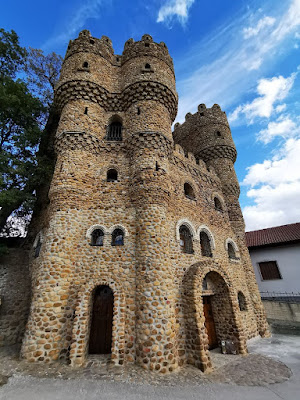 Documentation/more pictures
* A collection of pictures (diashow) on Flickr, made between 2003 and 2009 by basajauntxo in honor of Villarán, who was his uncle
* The site got a scholarly review in: Jo Farb Hernandez, Singular Spaces. From the Eccentric to the Extraordinary in Spanish Art Environments, Seattle (Raw Vision, SPACES, San José State University), 2013. An abridged version of this review on SPACES website
Videos
* Scenes of the site (2014) on the North Spain trip video by Serflac (YouTube, starts at 1.14.02, cannot be embedded here)
* Video by Miguel Angel Zález (6'04", You Tube, uploaded March 2012)