Located in the community of Sasamón, near the city of Burgos in Spain, this singular architecture,is a house to live in, a workshop and a museum, and it is rather special, isn't it?

This building.was constructed single-handedly by Carlos Salazar Gutiérrez (1944), who is also known as Salaguti.

As a young man he wanted to be an artist, notably a sculptor and a painter. He wanted to go to an art school, but was rejected and so he became a self-taught artist.

Salaguti made all kinds of sculptures which he sold to private collectors. but he also has made artistic constructions such as fountains and monuments for public places in Spanish communities,

Here is an example of a sculpture he made for a square, the Plaza Alonso Martinez, in Burgos:


Although he started as an autodidact artist, it might be that Guitérrez developed into a professional artist. However, up to now I could not trace sources showing how the official Spanish art world appreciates his position.

In the late 1970s, around 1977,  Salaguti began to construct a house, both with the intention to live and work there and to have a museum to expose his creations..


It became quite a special structure, characterized by a huge, some four meters high sculpted elf-portrait of the bearded artist, which is part of the outside wall. The two story building has various other special features, like a wall with all kind of faces which emerge in relief.

The house is located on a hill in a quiet rural area, some kilometers from the center of Sasamón and as far as I understand, when the artist is at home, visitors are welcome to come inside to see Salaguti's artwork.

Local authorities apparently are positive about this singular architecture. On Sasamón's official website the site is announced as one of the interesting places of the community to view.
Situation late 2021 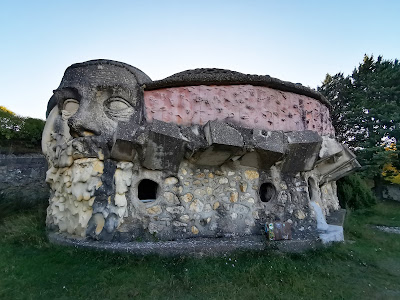 * Scenes of the site (2014), both of its exterior and is interior, on the North Spain trip video by Serflac (YouTube, starts at 1.10.47, cannot be embedded here)