The picture above gives an impression of the Garden of ornaments in the community of Stowupland  (Suffolk area, United Kingdom) as it was in September 2008, just before it was demolished.

The garden project probably came in full swing when Bird got retired, probably in the early 1990s.

The following pictures, made in the 1990s,  show that in these years the garden was abundantly decorated with all kinds of colourful items, including a display with US license plates.


This display also has a sign in which Bird pays tribute to his American connection. This refers to a number of friends he made in the United States when in the late 1950s he stayed there for some six months to attend a training course. 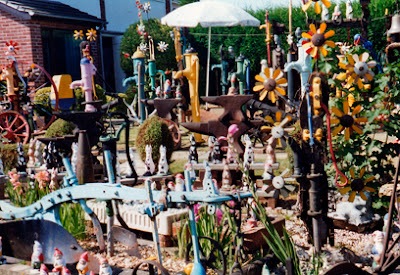 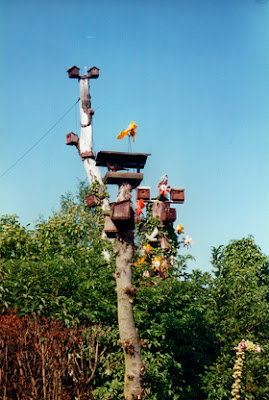 I suppose that after some time the house was sold. The new owners removed most of Bird's decorations. They may have thought that one water pump and one birdhouse would be enough.

Documentation
* Via private correspondence with Katie Teague, a member of Charles Bird's American connection I got some biographical data and a number of pictures.

* The internet has no documents that relate to the garden