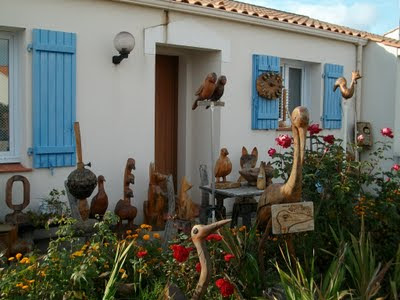 pictures courtesy of Sophie Lepetit, from her weblog


In her weblog of April 30, 2011, Sophie Lepetit wrote about her visit to Jean Billon, who lives in Beauvoir-sur-Mer in the Vendee area in France. The some 3000 wooden sculptures Billon made since he became retired in 1992, have transformed exterior and interior of his house into an art environment. The following post summarizes Sophie's observations (thanks Sophie!).


Jean Billon was born in 1930 in Beauvoir in a farmers' family and at age seventeen he went to work as a farmhand in Fontenay-le-Comte. He had a variety of jobs, like coal cutter, factory sweeper and porter at a bank, and retired from work in 1992, to settle in the community of Beauvoir.

Both by chance and by desire he began making wooden sculptures, using pine and cypress, modelling the wood with a chain saw. It took him time to get grip on this instrument, because as he says "the chainsaw chops and I wanted to sculpt". 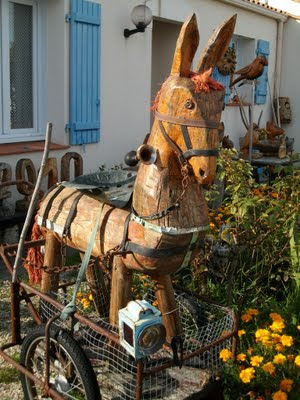 Jean Billon has made sculptures in various sizes, big ones like above mobile donkey (which is also available for a ride by young visitors), but also small ones, like owls, pigs, cats, turtles and so on. One of the largest sculptures is a 2.4 meter high ostrich.

He also depicted all kinds of food and tools, and he produced a number of books, some of these relating personal experiences like a surgery he underwent 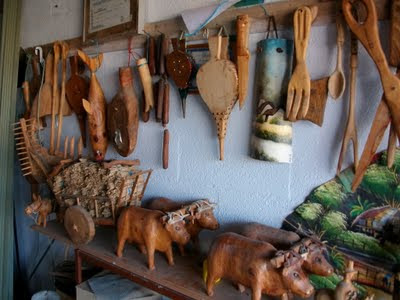 Since Jean Billon has a shoulder prosthesis, handling the chainsaw gradually has become problematic, so nowadays he is happy to be surrounded by his "children" and he likes to welcome passersby who stop to take a look at the sculpture garden.

Documentation/more pictures
* The internet hasn't much documentation of Jean Billon's creative activity. So, in agreement with Sophie Lepetit a translation into English of her article about Billon has been published on website
OEE-texts
*  Another article (August 12, 2011)  by Sophie Lepetit with new pictures, also of the wooden books