As far as I know this outsider environment in the south of France has no special name, so I just refer to it as sculpture garden. It is characterized by a large number of animals, constructed by applying concrete to a model of iron gauze.

This sculpture garden was created by Hubert Bastouil. Born in 1932 in a family of farmers in Saint Martin Lalande, he at first had a job as a farmer, but when he was around age 27 he went to work in a metalworking company.

He showed a lot of technical insight and was able to improve the company's machinery in such a way that production could proceed much faster.

At age 40 Bastouil began his own company in metal products, especially windows. He managed this firm together with his wife Georgette. When in later years, because of health problems,  Bastouil had to restrict his activities, Mrs Bastouil would continue managing the company.

All this years, Bastouil with his outspoken technical talent, did not show any urge to make artistic creations.

This changed however when mrs Bastouil thought it would be fine to decorate the garden with kind of a rock. Bastouil, who meanwhile had retired, tried to make one from concrete, to experience that his way of working was not so successful.

A garden with a zoo of sculpted animals

Then, when visiting the zoo in the Bois de Vincennes in Paris, he discovered that by applying layers of cement mixed with fiber on a model of iron gauze, one could make voluminous constructions. 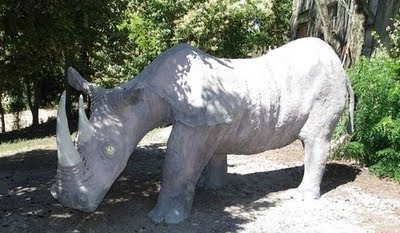 Starting around 1997 it became his passion to construct life-sized sculptures of all kinds of animals.

The garden around the house meanwhile has an extensive collection, including a rhinoceros, a crocodile, elephants, deer, giraffes and so on....a complete zoo... 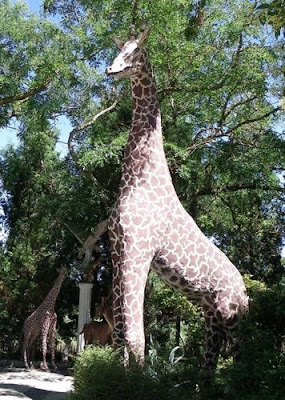 All together Bastouil has created some fifty life sized sculptures, the heaviest weighing some 800 kilo's.

The creations are rather naturalistic, both in appearance and in the way they have been painted. It has been reported that Bastouil uses images of animals in children's books as a model.

As far as possible and by appointment, the couple will welcome visitors.

From the 12th century on the sanctuary of Notre-Dame de Bassens is a spot of pilgrimage, located in the fields north of Saint Martin Lalande. Working for three years with a group of friends and using the same technique he applies for the creation of the sculptures, Bastouil has constructed on this spot a Lourdes grotto  (from 2000 until 2002). 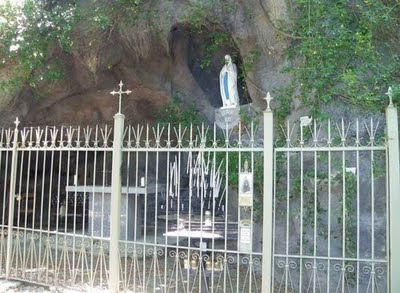 note
¹  When preparing the original version of this post (July 2011) the internet just had a few sources dealing with this art environment. The best source was an article in the regional newspaper Couleur Lauragais, upon which I have drawn a lot preparing this post. Meanwhile this site has been described in the blogs of Jean-Louis Bigou and Sophie Lepetit (see documentation)