Raahe is a historic city in Finland, located along the coast of the Gulf of Bothnia. The city's touristic website boasts its well preserved 19th century wood-built character.

Matti Lepistö (1948-2020), who lived in Raahe, saw himself as a self-taught artist. All his life he was interested in visual art and as a youngster he made wooden sculptures and  drawings. However, to earn a living. he went to work as a machinist in a metal factory.

He had this job for some twenty four years, until in 1991 he decided to leave it and to devote his life to creative activities. According to him, it was an unavoidable choice. 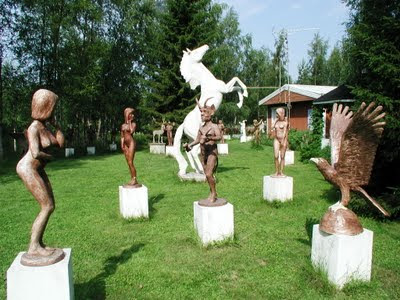 Lepistö since then has been making a lot of sculptures, using a technique he had developed himself. It's done by applying layers of a mixture of white concrete and white quartz mortar on a pre-modeled frame of iron and gaze. The creations are finished with an appropriate paint in an appropriate colour.

The way he described this method of working, suggests that everyone could work this way, but although the technique may be a basic element, a creative talent is needed to make sculptures as Lepistö did. 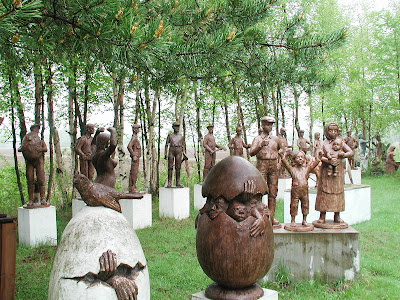 Matti Lepistö has been quite productive, making small and big, rather naturalistic sculptures of all kinds of persons and animals,  but also more symbolic works like big eggs from which new human or animal life appears.

A number of his works have been sold, but some 250 sculptures are exhibited in the garden around his house in Pattijoki in the outskirts of the city of Raahe.
Lepistö passed away on October 30, 2020 at age 72. He legated his sculpture garden to the city of Raahe, but the authorities still have to decide if they will accept this donation. The family has made public that the garden will be open to the public during the summer of 2021.

Documentation, more pictures
* note and pictures on ITEnet
* series of pictures on Facebook (2015)
* a series of photos (2018) by Sophie Lepetit in an album on Facebook
* an article in newspaper Raahenseutu reporting Lepisto's death