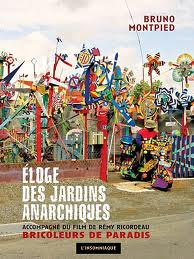 cover of the book

Early april 2011 a new book about art environments in France was presented:

Although this book was presented in conjunction with the premiere of the film Bricoleurs de paradis. Le Gazouillis des Èlèphants (2011, 52"), it doesn't parallel it.

The book is a production on its own, with a series of monographs dealing in depth with some thirty art environments in France, including the ones shown in the movie, and it has a lot of documentary material about many more sites.
Bruno Montpied is known for his effort to give very precise descriptions of the creations, so this is a rather welcome contribution to the knowledge of the subject.

The author has decided to focus upon what he calls spontaneous environments, broadly speaking the category which in France is referred to as works of les inspirés du bord des routes or habitants paysagistes. So it´s about artistic creations made by folk artists, farmers, artisans, laborers, in general ordinary people, active in and/or around their house. just like many of the art environments presented in this blog.

Of course, in France some well known sites like Cheval’s Palais Ideal, Picassiette’s house with mosaics and the sculpted rocks of Abbé Fouré are widely recognized and written about in various publications. But  Montpied’s merit is that his book also deals with sites that are relatively unknown to the general public or which up to now got little publicity.

The book comes with a DVD, which has the Bricoleurs movie, and in bonus an interview (2010) with Savine Faupin, who is head of the art brut department of the LaM museum in Lille.

More bonuses on the DVD: the super 8 movies Montpied many years ago has made of the sites of Marcel Landreau (site has disappeared)  and Raymond Guitet (site in decay).
Posted by henk van es at 5:21 PM