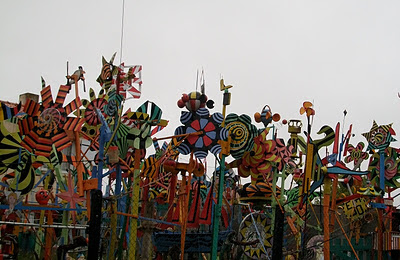 this picture and the next one courtesy
of Sophie Lepetit, from her weblog

This post is about an art environment in a small community in the french Vendée area, facing the Atlantic and often endowed with strong winds. Rather suitable to bring the abundance of whirligigs located in this site into motion.

The mobile devices in the garden have been constructed by André Pailloux (1943).
Currently (2011) retired, he had a technical job at a shipyard in les Sables-d'Olonne, not far from where he lives. Around 2000, some time before he would end his job, he began decorating his front garden with rotating devices, which in english probably best can be called "whirligigs".

The site as such has no special name, like Pailloux has no special french term to denote his constructions. They rotate in the wind (the more wind, the better, to some extent) and they are colorful, so colorful, kaleidoscopic colorful....... 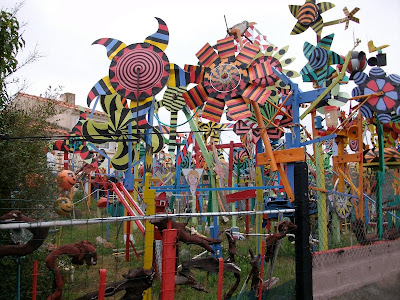 The proximity of the ocean implies that the paint quickly goes lost and that the moving parts are easily damaged, so Andre Pailloux has much to do in maintaining the constructions, meanwhile a collection of some 120 girouettes. A very severe storm has occasionally led to the blow-over of a number of whirligigs

Besides the windmills, Pailloux also decorated some bicycles. The next picture, by Bruno Montpied, shows one of these bikes, that really can be ridden. It is an item that would not be inappropriate to be exhibited in a museum as an object of kinetic art. 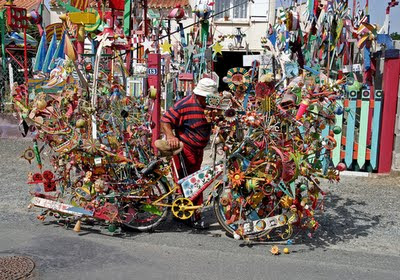 photo by Bruno Montpied, made available by him
to be published on the weblog les grigris de Sophie

André Pailloux has become active in making paintings too. He has a variety of themes, including ships, as the next picture shows.

Documentation
* Pailloux's garden is depicted on the cover of the book by Bruno Montpied, Éloge des jardins anarchiques, Montreuil-sous-Bois, 2011, which includes a chapter about this art environment. The site is also included in Montpied's Gazouillis des Éléphants (2017)
* In her weblog Sophie Lepetit published her impression of the creations (in french) together with a number of pictures: text august 11, 2011, the paintings september 1, 2011, the bike and the paintings september 21, 2011 and more pictures september 29, 2011
* Display on the website of Jeanine Rivais of an interview she had with André Pailloux (January 2018)
* Article (nov 2018) in regional journal Ouest-France
Videos
* Video by Le Parisien (July 2012, Daily Motion, 2'30")