The text in the image above, added to the fence of a house in Monreal, Germany, reads "Kunst aus Artenvilfärtiger Materie" (Art made from species-rich matter) ¹.
Monreal, a small centuries old picturesque community of less then a thousand inhabitants in Germany's Eiffel area,  has a castle in ruins on a hill, the Löwenburg (Lion Castle).

Located at the foot of that hill a house through the years has developed into an art environment. In 1911 it was bought by grandfather Meurer. His son Fritz Meurer (1932-2003) lived there all his life. In 1959 Markus Meurer was born, and he lived there until he had to quit in 2006.

It so happened that in this house, from 1959 on, for a number of years three generations Meurer lived together.

It was an artistic, creative family. Markus' grandfather told him stories about worldly adventures and technical inventions. His father, Fritz Meurer, an autodidact sculptor and visual artist, teached him working with wire, metal and stone.

The interior of the house has been abundantly decorated by Markus Meurer: paintings on the ceilings and on the walls, lots of sculptures, all kinds of bric à brac, all together producing kind of a Gesamtkunstwerk.

In the same way the exterior has been equipped with a variety of constructions and decorative items.

The house and its exterior have become known as the Künstlerhaus in Monreal (Monreal Artist's House) and those interested in this art were welcome to pay a visit.

After first his grandfather, and later (in 2002 and 2003) his parents had died, Markus Meurer, who meanwhile had developed into an outsider artist with a very personal signature, came under pressure of the local authorities to quit the house.

This he finally did in 2006 when he left for the United Kingdom, to live there with his English wife.

The local authorities declared the house unhabitable and demolished it in the autumn of 2007, despite protests from (inter)national gremia. Before the demolition took place, a group of Markus Meurer's friends removed all movable creative constructions, which nowadays are safely stored in a depot.

In 2008 Meurer and his wife returned to Germany, settling in Kevelaer in the west of Germany close to the border with the Netherlands.In mid-2021 the couple moved to Lühlerheim, a residence in a wooded area in Schermbeck, a small community about 45 km east of Kevelaer. Here Meurer continues making his creations.

Using wires, metal, all kinds of thrown away materials and objects, whatever, he creates assemblages and constructs, depicting fascinating insects, animals, mobiles and structures.

The picture below shows -as an example- a recent (2015) creation, a spider.

In 2014 Meurer once more focused on decorating part of the house where he lives by adding a large scale painting to the walls of the roof terrace. 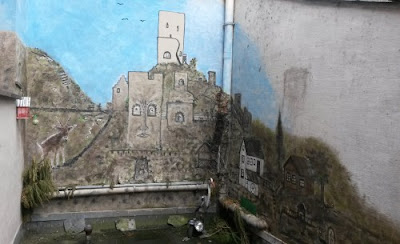 On its left side the painting depicts the hill in Monreal with the Löwenburg. 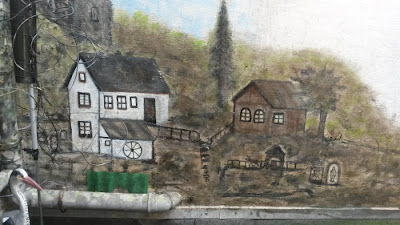 The side view shows the parental house at the foot of the hill. 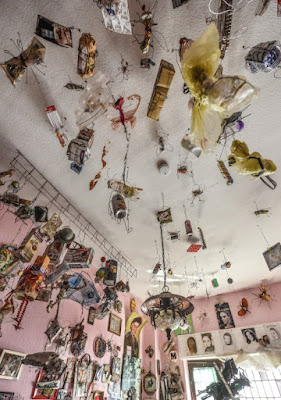 In his own way Meurer also decorated the interior of the house.
Expositions

In the course of 2016 Meurer got his own cabinet in the permanent exposition of the dr Guislain Museum in Gent, Belgium. 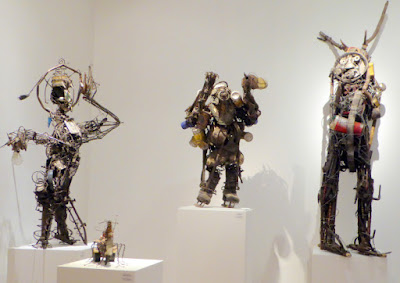 Previously he participated in various other expositions, such as:
* Kunsthaus Kannen in Münster, Germany (various expo's from 2007 on)
* the Outsider Art House in Veenhuizen Netherlands (2009),
* the Verbeke Foundation (Back Yard Genius) in Antwerp, Belgium (2010) and
* INSITA Triennial of naive art, art brut and outsider art in Bratislava, Slovakia (2010).

Documentation
* From February 2014 on a weblog (in German), edited by Peter Nieting, documents Markus Meurer's career, listing his exhibitions and articles that have been published about him and his creations.
* Website of Markus Meurer's agent, Haus Nieting (in English); the link leads to a page with a large number of images of Meurer's house in Monreal
* Webpage of the Stadshof Collection (Netherlands)

note
¹ "artenvilfältig" is an expression coined by Markus Meurer, which means something like "diversity of species" and indicates the different materials he uses to make his objects
first published January 2012, last revised January 2022