Until recently not much has been published about Auguste Corsin's Villa of rocks in Étampes, France. Most items of his sculpture garden have gone lost and it seems he himself has come into oblivion.

A documentary review published on the website "Corpus Étampois"

On December 29, 2011, the website Corpus Étampois, that deals with various interesting features of the French city of Étampes and documents its history, has published a documentary review of life and works of Auguste Corsin.

This web page has a lot of pictures and includes an extensive documentation. Some data, however, still are missing, so this publication is also a call in order to supplement these.

Auguste Corsin (1861-1929) was an employee (machinist, a job of standing) of the French railways, who served in particular on the Paris-Orleans line. He was born in Montluçon and settled in 1892 in Étampes, a city south of Paris.

In the early years of the 20th century, somewhere between 1901 and 1904, he built a house along the Boulevard St Michel (nowadays nr. 50), where he settled with his family.

During many years Auguste Corsin has been working hard to decorate the garden facing the street. 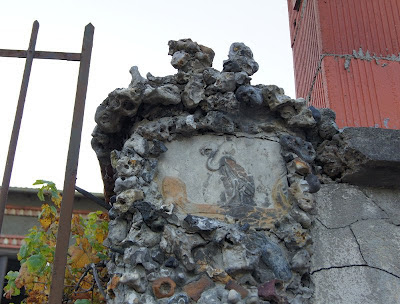 The pictures in this post give an impression of the decorations on the columns, that are part of the fence along the street. The sculptures and other items that decorated the garden itself, meanwhile for the most part have gone lost .
.
But there should have been sculptures of various birds, bears, lions, and monkeys climbing a palm tree.

Images of the creations have been saved, because the garden appears briefly in a film that was shown in the French pavilion of the International Exposition 1939 in New York (Violon d'Ingres, 1938, 30 min, by Jacques-Bernard Brunius, available on DVD). Stills from this film are on the Corpus Étampois website. Take a look (text in French, but a lot of images).

In the 1930s Auguste Corsin's creations enjoyed the interest of surrealist artists from Paris, like these artists also were interested in facteur Cheval's Palais Idéal.

Auguste Corsin currently may be in oblivion, his work lives on at the Étampes website.