Unite to save
This article describes the activities that after the death of Jean Linard (1931-2012) took place to preserve his creation for the future. For a description of Linard's life and work, see Wikipedia

Activities to save Jean Linard's Cathédrale after it's creator had died

End January 2012 in accordance with the Linard family, a group of 43 artists, art critics, curators, art collectors and writers about art has signed a petition, adressed to the French minister of culture, asking to do what is in her power -cooperating with regional and local authorities- to keep the site open for the public, protect and save Linard's creation and promote that the complex becomes a cultural center.

Of course, France has more art environments that deserve to be saved for the future. One of the three most important sites in France, les Rochers sculptés by Abbé Fouré. even hasn't a protected status, and then you have the sites of Chomo, Gabriel Albert and Bodan Litnianski that need attention, not to mention other less known sites. 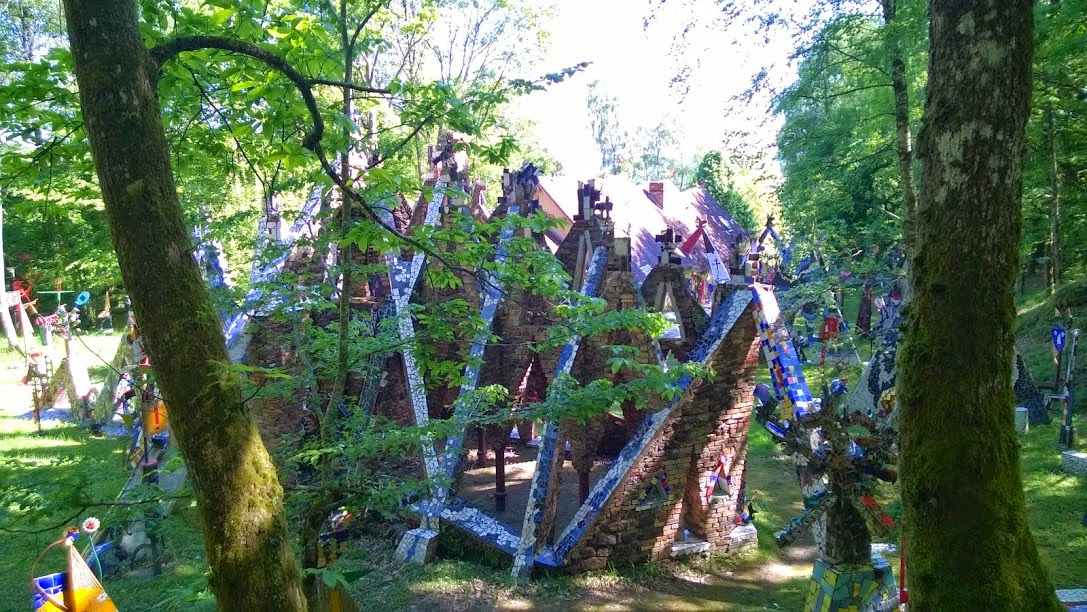 However, it could be that Linard's art environment precisely has the connotation and circumstances that may lead to actions by public officials, which not only are relevant for this site, but also for other ones.

Maybe this is the moment. So, that's why this post is subtitled "unite to save". 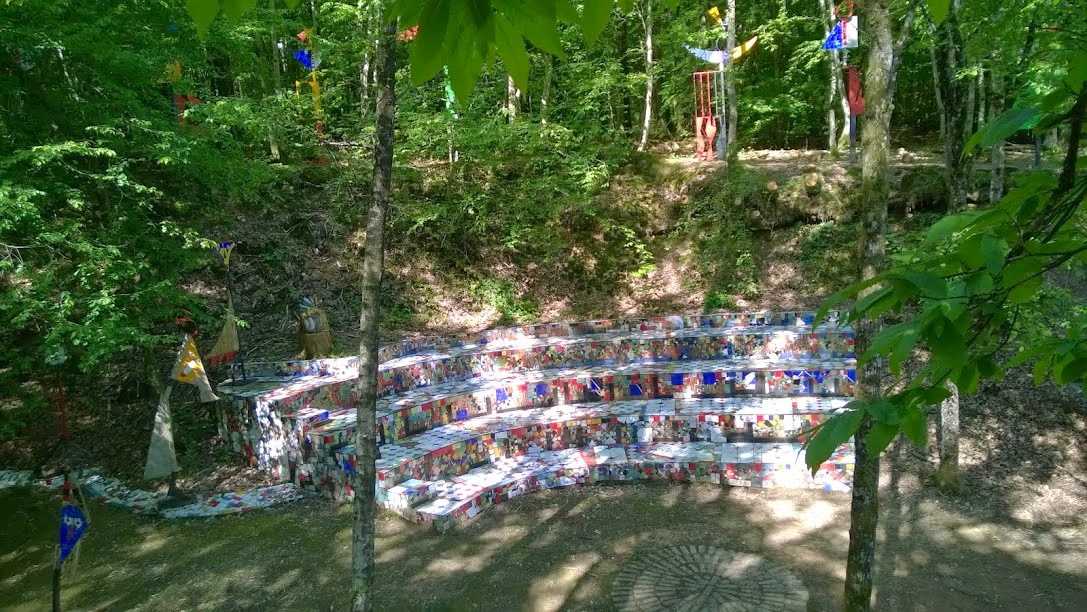 Activities in 2012 and following years

Mid-march 2012 the minister of culture has reacted by paying a visit to the site and expressing a positive attitude towards measures promoting the survival of the site.

At first a committee was formed, with members of the Linard family and representatives of local and regional public bodies. A poster summarized the activities foreseen for the summer of 2012. In July and August the site would be open for visits by the public, there would  be shows, live concerts and meetings with artists.

And there would be lectures and bookshops about art environments in France in general. 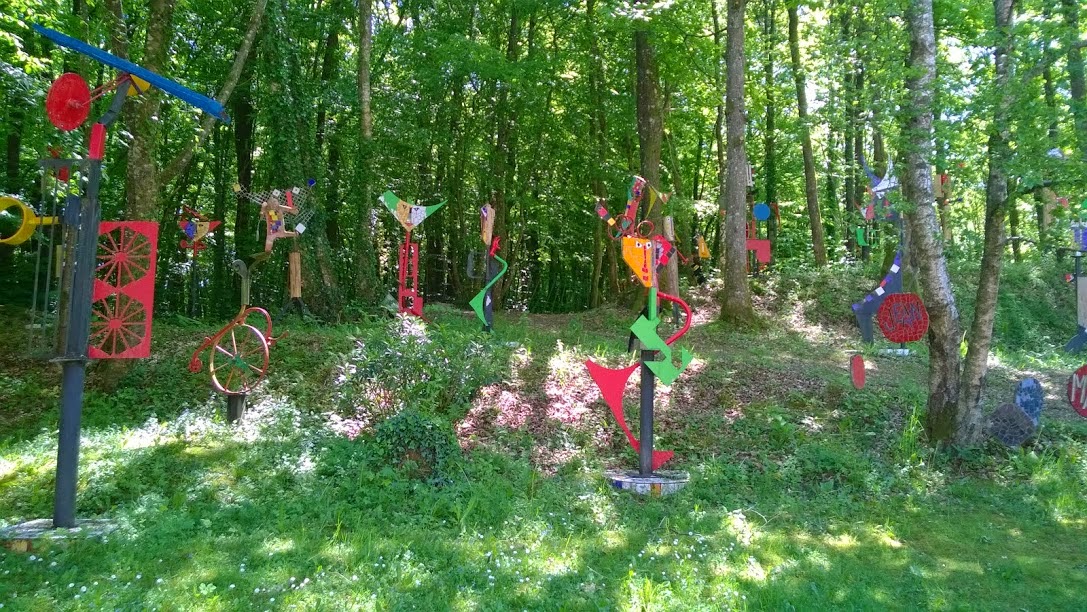 In the course of 2012 the association Autour de la cathédrale Jean Linard was established to organize activities related to the maintenance of the site (done by volunteers), the reception of visitors, the publicity, the organization of various discussions, meetings and events and -last but not least- the preparation of a plan for the future of the site.

In 2013 the site was open during the summer, which was continued in the following years.
In 2019, 8,000 visitors visited Linard's art environment.
All those years regular maintenance was carried out by volunteers and all kinds of meetings took place.

2019: a plan for the future management of the site

A plan was also developed for the future management of the site via what in France is called a SCIC (Société coopérative d’intérêt collectif), the formation of a cooperative of involved people who purchase shares to raise the capital to buy the site.

In November 2019 the association discussed this plan with the heirs, also asking for a period of three years to realise their plan to form a cooperative. The association had three proposals to continue the management of the site: a free rental, a lease-sale, an emphyteutic lease (a type of real estate contract used in France that includes that the lessee must improve the property).

However, the heirs in majority did not accept the plan. This meant that in summer 2020 the site didn't reopen.
2020: The site reported as unsafe for visitors
In October 2020 the regional newspaper Le Berry reported that in the course of 2020 an official safety committee had visited the site and had concluded that the safety conditions for welcoming the public were not met and that the site presented a danger.
The heirs then turned to the local, departmental and regional authorities with an urgent appeal to make the site public property and to arrange the exploration as it exists for Maison Picassiette or Cheval's Palais Idéal. It is not clear if and how the authorities reacted.
November 2021 The association has been dissolved
In November 2021, the association reported that it had decided to dissolve the organization for lack of any prospects.
July 2022: new owners
At the beginning of July 2022, the regional press reported that the Cathédrale had been bought by Charlotte Coller and William Rouger. Charlotte is from Achères, a community very close to the site. Charlotte and William worked in Paris as pastry chefs, jobs they have now left behind to bring the cathedral back to life.
The couple hoped to be able to receive the public again, and indeed, the site officially reopened on July 14, 2022 (national holiday Quatorze Juillet).
More info on the recently published website (under construction)
Links
* A link to Facebook (february 2012), with the background (in English) of the campaign to save the site
* A new website "La cathédrale de Jean Linard" (launched May 2012)
* Video (published September 2014) by the direction de l'inventaire du patrimoine de la region Centre (Heritage board of the Centre region), with views from the air of the site
* Article (December 2018) in regional journal le Berry Républicain about the plan to form a cooperation
* Article (December 2019) in regional journal le Berry Républicain about the rejection of the plan by the heirs
* Article (October 2020) in regional journal le Berry Républicain about the appeal of the heirs to the authorities
* Article (July 2022) on website France Bleu Berry about the sale to the new owners