The Italian isle of Sardinia has a sculpture garden with some very special characteristics.

Fiorenzo Pilia (b. 1933), a farmer who didn't enjoy much formal education and had no artistic training, in 1993 at age sixty began making sculptures, which he displayed in his orchard of some 4000 m².

Like so many other self-taught artists he uses residual material, but a special feature of his constructions is, that he applies various contemporary materials such as resin, cable waste and scrap of modern production processes.

One of the special constructions of the garden is a sculpture of a lying female, as in above picture, some 15 meters long, made by applying a mixture of foam and glue to a model from chicken wire. The inside of this sculpture, which can be entered via a door between the two legs, shows internal organs made of various wire-work and cable material.

This creation represents the mystery of life. It took Pilia some four years to complete it. 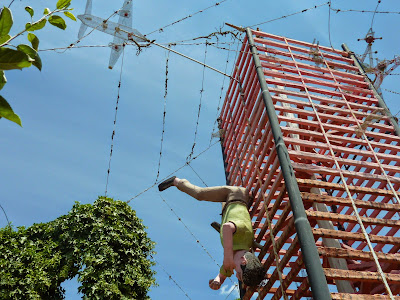 However, the garden has many more creative constructions, such as a towery structure (picture above) that represents one of the former New York Twin Towers during the 9-11 attack. 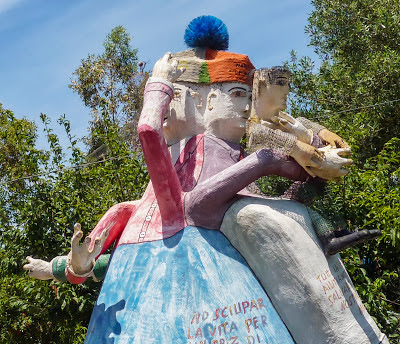 There are scenes of grouped people, often very colorful, on top of a rather large pedestal.
. 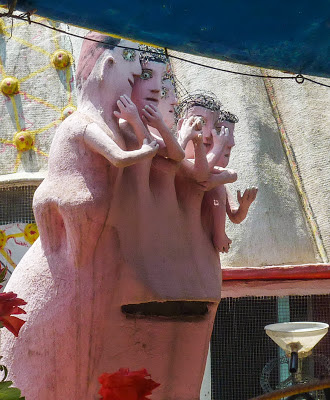 Such a pedestal may have a hidden door that opens to a surprise. 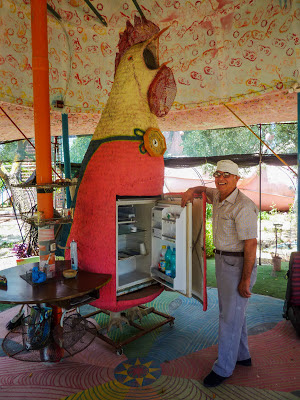 One will also come next to a strange flying machine and kind of a crocodile with a tail in the form of a hand, as shown below. 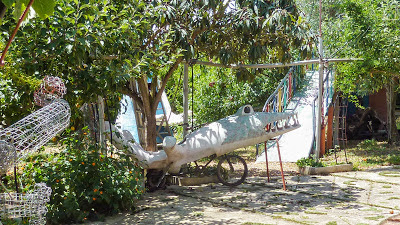 Pilia likes working with gauze, chicken wire and other iron material, which he transforms for example into a more than life-sized figure facing the sky. 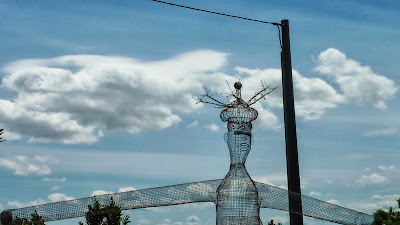 Fiorenzo Pilia's fantastic garden is about a kilometer outside the Sardinian community of San Sperate, which has some fame as a "village of artists", initiated in 1968 by Italian sculptor Pinuccio Sciola.

Fiorenzo Pilia
Giardino fantastico
Strada di San Sperate a Decimomannu
San Sperate, Sardegna, Italy
can be visited when the artist is at the location

Email ThisBlogThis!Share to TwitterShare to FacebookShare to Pinterest
Labels: garden with sculptures from polystyrene, singular architecture