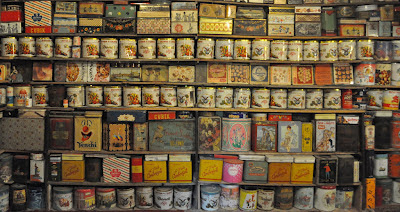 The objects in this northern-Italian museum represent the obvious utensils and objects of everyday life. Each item as such will not make a specific impression, but many thousands of objects grouped together in geometric decorative patterns on a wall are impressive indeed and form kind of an artwork.

The collection was assembled by Ettore Guatelli (1921-2000). Born in the community of Collecchio in the Parma area, in his youth he would not enjoy much schooling, also because of health problems. However, later in life, by studying on his own merits, he succeeded in getting a diploma as a teacher.

For many years he has been teaching children of a primary school.

In the 1950s Guatelli began collecting all kind of utensils and objects of daily life, like hammers, screwdrivers, pliers, suitcases, clocks, shoes..... 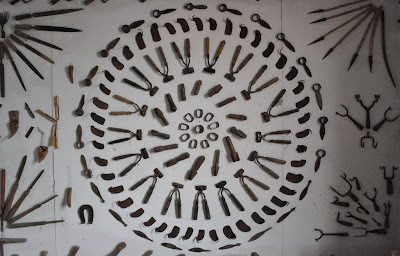 In this period western Europe saw the transition of small scale craftsmanship and farming into a more large scale and industrialized system of production, which entailed the discarding of hitherto used craft objects.

Guatelli would regularly visit the second-hand shops in the area and buy as many objects he could afford. Eventually the collection included some 60.000 items. 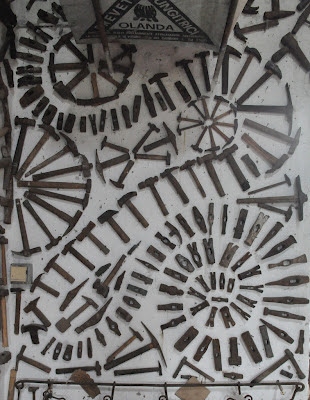 Bringing together all these crafts as such is already a major ethnographic venture, but what's more, these items in a unique way were displayed on the walls and the floor of the farm where Guatelli lived.

The rhythmic geometric patterns as manifested on the walls make one forget this is about utensils and daily objects. 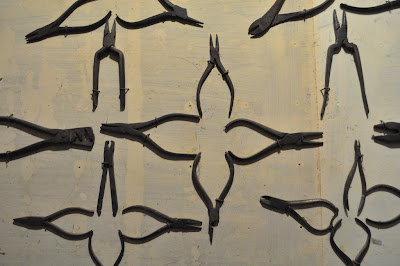 In the course of the years Ettore Guatelli's collection became ever more seen as an important one, both from an ethnographic and from an artistic point of view, and Guatelli himself became convinced the farm should become kind of a museum. He also wrote many articles on anthropological, ethnographic and other subjects.
So it happened that in 1986 the provincial authorities decided to ask a committee of experts to advise about future actions. It took a lot of time and discussion and when Ettore Guatelli died in 2000 no final decision had been reached.

The farm has become a museum

However, in 2002 the province decided to buy the collection and to continue its exposition in the farm. In 2003 the Fondazione Museo Ettore Guatelli was officially entrusted to manage the museum, which is done with a small staff and an enthusiastic group of friends and volunteers.