The house on the corner of the Carrer Muralla and the Carrer de Llagestra in the center of the small community of Llers, Catalonia (Spain), has an abundantly decorated wall ¹.

Quite a difference, isn't it?

Indeed, José Giralt, the man who is creating this art environment is a quick and prolific worker.

Born in Llers in 1925 as son of a landowner with a big olive grove, José Giralt at around age seventeen began an art education at the Ecola d'Art d'Olot, a known art institute in Catalonia.

In the 1930s and 40s the Spanish Civil War and World War II raged, and when Giralt as a young man finished his studies, he had no opportunity to settle as a professional artist.

So at age 21, in 1946, with his wife he just had married,  he left for southern France, where he found employment as a tiler, a job he held for forty years. The couple would have two sons, who live in France.

All his life, Giralt has been making drawings and small paintings, but this has remained a private affair, without any link to the art world.

He would regularly spend his summer holidays in the family house in Llers. It was bought and restored by Giralt's father after World War II. It's name Segal House has no relation with the Giralt family, but refers to a former owner, which is a common habit in this region.

In the late 1980s Giralt retired from work and he could stay in Llers for longer periods.

It so happened that in 2006, so at age 81, he decided to decorate the exterior of the old family house, doing this by making tiles with bas-reliefs added to the outside walls and by making sculptures  positioned around the house, all items placed in such a way that they could easily be seen by passersby. 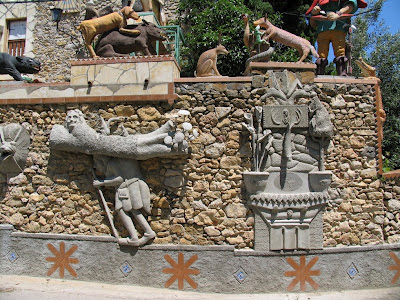 The sculptures depict all kind of animals in various positions, hunting scenes, but also people in traditional Catalonian costumes, witches from regional lore and so on. The dog attacking a wild pig (upper left in above picture) was Giralt's first production. 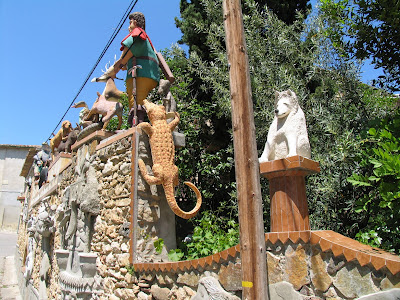 Because of his art education Giralt was acquainted with technical aspects of protecting sculptures from the influence of weather and his work likely can stand the test of time for many years. 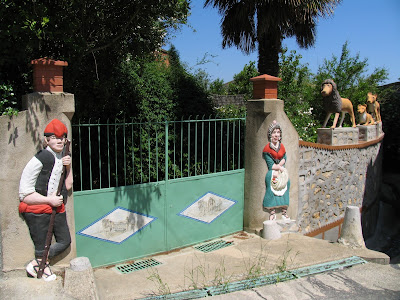 Giralt never has encountered problems with the local authorities because of his creative activities, neither has he faced any vandalism.

Around 2015, when Giralt was in his early nineties he stopped adding new creations to the site. 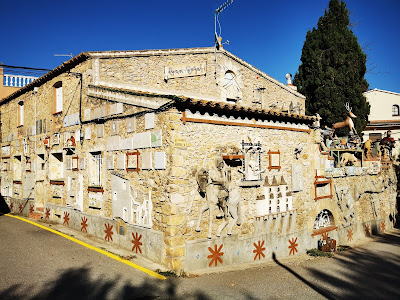 The picture above, made in October 2021 by Tiramisu Bootfighter, who traveled through Spain in the context of his project La Valise, Galerie Ambulante, shows that the site at that time still was in good condition.
Documentation
* The site got a scholarly review in: Jo Farb Hernandez, Singular Spaces. From the Eccentric to the Extraordinary in Spanish Art Environments, Seattle (Raw Vision, SPACES, San José State University), 2013. ISBN 978-0-615-78565-3. A short version of this article on SPACES website
* On her weblog Sophie Lepetit has a album with over 50 photos of the site, taken in 2018
* Scenes of the site (2012) on the Provincia de Girona (Catalunya)  trip video by Serflac (YouTube,
starts at 15.10, cannot be embedded here)

note
¹ when in april 2012  I published the first version of this post, I even didn't know the name of the creator of this art environment; meanwhile more information has become available, especially via the book by Jo Farb Hernandez referred to above and I like to acknowledge that the biographic details in the revised version of this post, are based upon Jo's book

José Giralt
Can Segal
Carrer Muralla 10
Llers, Girona, Catalunya, Spain
visible from the street
streetview
no visits, but decorations can be seen from the street